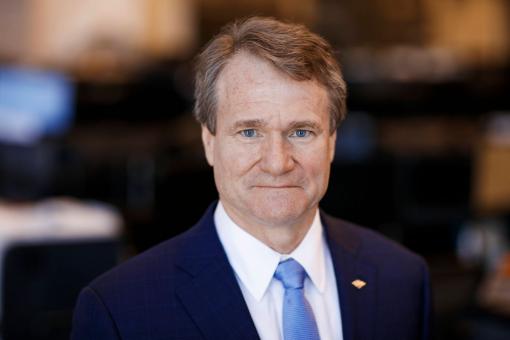 Brian Moynihan is CEO of Bank of America, a post he has held since January 1, 2010. Prior to becoming CEO, Moynihan served in various executive capacities for the company and its predecessors since joining the company in 1993.  Moynihan also chairs Bank of America's Global Diversity and Inclusion Council. A history concentrator and member of the rugby team, Moynihan earned a Bachelor of Arts from Brown in 1981 and went on to earn his law degree from the University of Notre Dame. He was elected to serve on the Brown Corporation Board of Fellows after serving on the Board of Trustees from 2010 to 2016. Previously he served as a member of the President's Leadership Council. Moynihan lends his expertise to various organizations that focus on economic trends and policymaking, including the World Economic Forum's International Business Council, The Clearing House, the Financial Services Forum and the Financial Services Roundtable, (chair of both), and the Business Roundtable. He is also a member of the Federal Advisory Council of the Federal Reserve Bank and the Congressional Medal of Honor Foundation Board. Beyond banking and finance, Moynihan has served on the boards of YouthBuild Boston and the Boys and Girls Clubs of Boston. He is a member of the Museum Council for the Smithsonian's National Museum of African American History and Culture and has also worked with Providence-based The Haitian Project for many years.