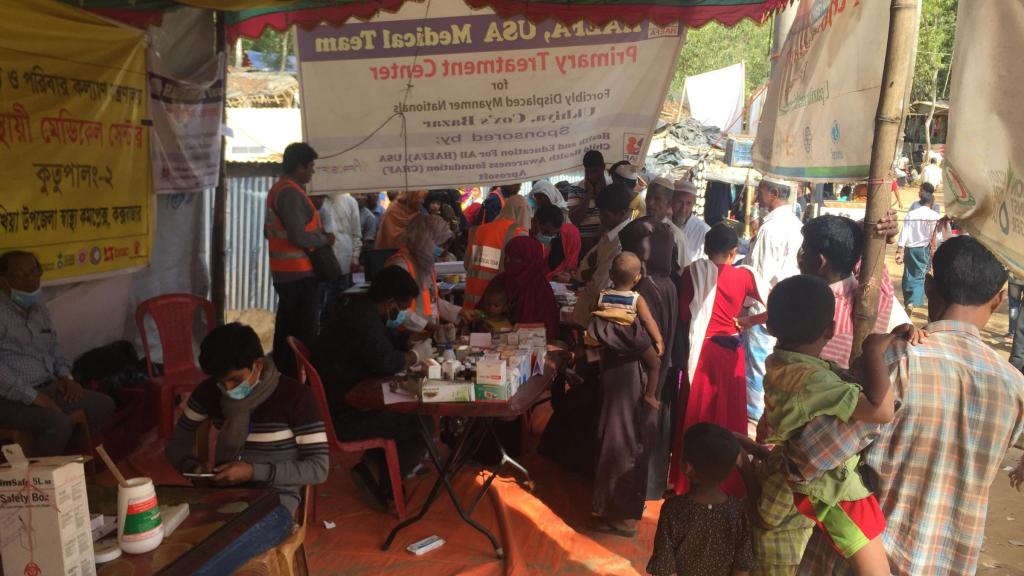 In October of 2017, Dr. Ruhul Abid, Associate Professor of Surgery at the Brown University Warren Alpert Medical School, and Dr. Jane Carter, Associate Professor of Medicine at the Warren Alpert Medical School, traveled to Bangladesh in response to the Rohingya refugee crisis to provide immediate medical care to those escaping persecution in Myanmar.

Medical tentThe Rohingya are an ethnic minority that have been living in the Rakhine state of Myanmar for centuries. They were stripped of their Myanmar citizenship by the military ruler General Ne Win in 1982 and, in the face of increasing violence and discrimination, have since been crossing the border into Bangladesh and neighboring countries. Since August of 2017, more than 668,000 refugees have fled Myanmar into Bangladesh.

Dr. Abid grew up in Bangladesh. Following a devastating factory fire in 2012, Abid and a group of U.S.-based physicians founded Health and Education For All (HAEFA; www.haefa.org) as a response to the needs of Bangladesh garment workers. HAEFA provides free healthcare and medicine as well as health training and education to industrial workers in Bangladesh and other countries.

In 2017, the HAEFA model was extended to the Rohingya refugee camps. Dr. Abid describes being overwhelmed by the scale of the humanitarian disaster at the Rohingya camps. “Houses built with canvas, bamboos, cane and the floor is simple mud, which gets wet and muddy during rain. Many of the temporary latrines get filled up within days...One can only imagine the horrific situation in Myanmar that continues to send thousands of refugees across the border to live in camps such as this.”

Now, four months since arriving at the camps, the 16-member medical teams on site see between 200 and 300 patients every day in the two camps in Kutupalong and Balukhali, Ukhiya. The total number of patients seen by HAEFA exceeded 14,000 in January 2018. Dr. Abid and the medical teams have been working to create a digital platform to document and track the health of Rohingya refugees, which serves as a database for the Bangladesh government and other UN agencies working there.

More informatin on Dr. Abid's work and the Rohingya refugee crisis can be found in articles by the Brown Daily Herald and the Brown Medicine Magazine.