The Future of Learning 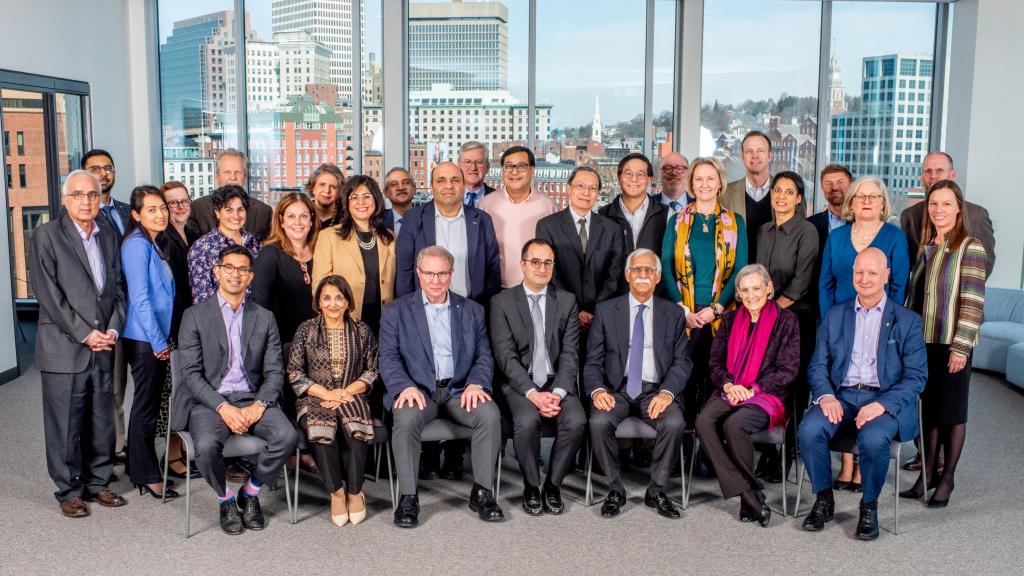 On March 2, faculty members from Aga Khan University and higher education experts from across North America arrived at Brown University for a two-day conference on the future of liberal arts learning.

Over the course of the two days, conference participants exchanged ideas and examined case studies on challenges facing liberal arts programs, strategies to incorporate diverse perspectives into the life cycle of higher education institutions, and ways to ensure both academic excellence and equitable access.

“The breakout sessions stood out to me because they allowed for an intimate discussion as opposed to when the whole large group was together,” said Shahzad Bashir, Aga Khan Professor of Islamic Studies at Brown. “I thought that all the tables worked efficiently to respond to the issues that had been put to them, leading to a comprehensive but detail-oriented set of suggestions.”

On the second day of the conference, participants welcomed a panel of current students and recent graduates from Brown. Dylan Daniels ‘16, Minty Pham ‘20, Jamie Smith ‘20, and Andrea Grossmann ‘23 answered questions about why they chose a liberal arts curriculum, how their family and friends have reacted to their decision to pursue a more flexible educational path, how they have bridged their learning with their career aspirations, and where they see potential for change within the liberal arts sphere.

Grossmann is a first-year student from Maine planning to major in Science, Technology, and Society. During the session, she spoke about the support her parents gave her during her decision process to pursue liberal arts.

“At the conference, I shared that my parents came from Venezuela, where you had to choose your career track before graduating high school,” she said. “When my older brother began applying to schools and ended up at a liberal arts college, my parents were really impressed with the amount of choice. They ingrained a lot of appreciation for academic choice and interdisciplinary studies that when paired with my indecisiveness surrounding what I want to study really guided me toward applying to liberal arts colleges.”

Daniels graduated from Brown in 2016 with a unique Bachelor’s in Neuroscience and International Relations (IR) and a Master’s in Public Affairs. He then went on to work as a performance management analyst for the RI Office of Management and Budget. In 2017, he returned to Brown as a research technician in a computational neuroscience lab. With his undergraduate and postgraduate years behind him, he has been able to reflect on his experience with liberal arts and the ways in which his professional work has dovetailed with his educational pursuits.

“During the panel, I talked about how a double major in Neuroscience and IR is an unusual combination and is true to the spirit of liberal arts,” he said. “While these two fields are vastly different, studying them side-by-side really encouraged me to think about how I could leverage what I was learning to have a positive impact on the world. I’m interested in finding ways that the sciences and humanities intersect, and so I decided to get a master's degree and focus my studies and my career on health inequalities. I work in a neuroscience lab now, and I very much bring my humanities background into my work as I think about ways to change healthcare systems and address inequalities.”

Bashir believes that AKU leaders departed Brown after the two days equipped with a clearer sense of the steps needed to successfully launch the AKU Faculty of Arts and Sciences.

“My observation was that most issues that came up were in their minds already but the event was crucial to bring it all together and affirm many of the plans that they had and to modify some based on the feedback,” he said.

For Bashir, the conference also represented a mutual learning opportunity.

“One thing I appreciated especially was that the participants spoke from the perspective of their experiences in the U.S. but with full cognizance that what will happen in Pakistan is not going to replicate the U.S. pattern in full,” he said. “The event then helped to transmit the ethos of the liberal arts but without presuming a hierarchy or a sense that people in the U.S. always know better because institutions here have existed for longer. The event was a learning experience for us as well and may suggest ways to innovate by watching how a new institution is created.”