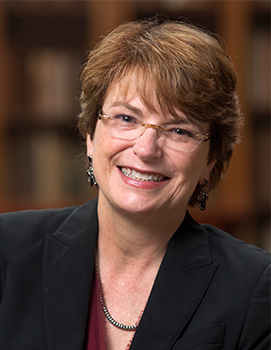 Christina Hull Paxson has served as Brown University’s 19th president and professor of economics and public policy since July 1, 2012.

Under Paxson’s leadership, Brown has fortified its standing as a leading research university known for its excellence and innovation in undergraduate education, its transformational vision in fueling economic development through community and government partnerships, and its commitment to inclusion and access.

Paxson’s ambitious strategic plan for Brown establishes the University at the forefront of higher education in all these areas. She has led the creation and growth of centers and institutes that connect top researchers and scholars to confront critical 21st-century issues in areas spanning neuroscience, environmental and climate studies, economics, international and public policy, humanistic studies, and translating science and technology to find treatments and cures for disease. At the same time, Brown continues to lead in undergraduate education, with Brown students and graduates earning more Fulbright Scholarships than any other university in the U.S. for three consecutive years.

Led by Paxson, Brown’s public-private partnerships with government, businesses and industry have anchored the ongoing economic transformation of the formerly depressed Jewelry District in downtown Providence. This includes fueling the development of South Street Landing by moving 400 Brown employees into a former power plant; becoming the lead anchor tenant to enable the opening of the Wexford Innovation Center developed by Wexford Science and Technology; and Brown’s partnership with the University of Rhode Island and two global startup accelerators to create one of the state’s new innovation campuses.

Paxson is a passionate advocate on issues of access to higher education, and Brown has gained international attention for its campus-wide effort to develop and implement its comprehensive Pathways to Diversity and Inclusion action plan, which the University launched in 2016. In addition, Brown became a national model in working with its students to create one of the first student centers for undocumented, low-income and first-generation college students. Her leadership in creating The Brown Promise financial aid initiative has eliminated loans from the financial aid packages awarded by the University, decreasing financial barriers to access to a Brown education.

In addition, Paxson has overseen consecutive record-setting years in philanthropic support for Brown. Growth in fundraising and investment has strengthened the University’s teaching and research with support for state-of-the-art facilities that include the Friedman Hall undergraduate teaching and learning building, the Engineering Research Center, expansion of the Watson Institute for Public and International Affairs, and spaces for research and study for data sciences, brain science, education, entrepreneurship, public health and other growing fields at Brown.

A noted economist and public health expert, Paxson became a fellow of the American Academy of Arts and Sciences in 2017. Paxson has been the principal investigator on several research projects supported by the National Institutes of Health and authored or co-authored numerous journal articles. Her principal research explored the relationship of economic factors to health and welfare over the life course, particularly on the lives of children. While at Princeton, Paxson served as investigator for the Fragile Families Study and as co-editor of the journal, The Future of Children.

Paxson served as vice president of the American Economic Association and is a member of the Council on Foreign Relations. In 2020, Paxson was appointed chair of the board of directors for the Association of American Universities, which helps to shape national policy for higher education, science and innovation. In 2021, she will become chair of the board of directors of the Federal Reserve Bank of Boston, of which she has been a board member since 2016.

Paxson is a Phi Beta Kappa graduate of Swarthmore College, and earned her PhD in economics at Columbia University.