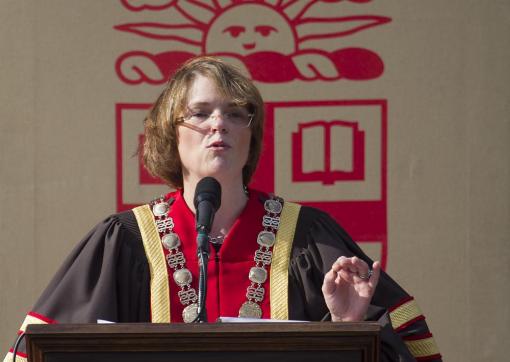 Chancellor Tisch, Chancellor Emeritus Joukowsky, fellows and trustees of the Corporation, faculty, staff, alumni, parents and students, it is my great pleasure, as president of Brown University, to declare the two hundred and fifty-first academic year open.

I extend a special welcome to the members of the entering classes of the graduate school, medical school and the college. Among them are:

This is a special year at Brown: In March, we began the celebration of the 250th anniversary of the University’s founding. In the coming year, you are likely to hear a great deal about Brown’s history and how it relates to our vision of Brown’s future. Before I introduce our Convocation speaker, I want to say a few words about how Brown’s approach to education has evolved over the years — what’s changed, what’s remained the same, and how it relates to Brown’s role in the world.

Let’s start with the curriculum, which has most definitely changed. Consider what a Brown student would have encountered in the college’s earliest years. Martha Mitchell, in theEncyclopedia Brunoniana, describes the original curriculum as being “somewhat limited in range.” This is an understatement. In the late 18th century, Brown students moved in lock-step through a rigidly defined set of courses. The idea of an “elective” had not yet been invented. The first year of study was devoted to Greek and Latin. Rhetoric, geography and logic were added in the second year. In the third year, students focused on algebra and trigonometry, surveying and navigation, and moral philosophy. The fourth year concluded with “some history and a review of the studies of the previous years.”

In 1850, Brown University President Francis Wayland, confronted with declining student enrollments and a precarious financial situation, argued that the Brown curriculum was so out-of-date that it was driving away prospective students. He called for a complete re-engineering of the curriculum so that students could learn the skills they needed in the rapidly industrializing society that America had become.

In a report to the Brown Corporation, Wayland recommended the creation of new courses in optics, astronomy, political economy, and the principles of agriculture. He took the radical step of calling for the abolition of requirements, stating that “The various courses should be so arranged, that … every student might study what he chose, all that he chose, and nothing but what he chose.” (He followed this with the statement that “The Faculty, however, at the request of a parent or guardian, should have authority to assign to any student, such courses as they might deem for his advantage.” So much for freedom of choice!)

Wayland’s ideas were never fully implemented, but they did foreshadow the curriculum we have today. In the late 1960’s, two Brown students, Ira Magaziner and Elliot Maxwell, led a movement to reform Brown’s system of education. The goal was to provide students with the best possible liberal education — one that cultivated independent and rigorous thought. The famous “open curriculum” at Brown imposed no distribution requirements and had no core curriculum. To encourage students to take subjects that might feel foreign or intimidating, students could take as many courses as they wanted on a pass-fail basis.

Although there have been some modifications over the years, Brown students continue to be given remarkable freedom. And it is clear that students love this approach: With an acceptance rate of less than 10 percent, Brown is clearly not suffering from the declining enrollments that plagued the University at the beginning of President Wayland’s tenure.

The Brown community has also changed since Brown’s early days. In the beginning, Brown took a remarkably open approach to religious freedom which created an inclusive community. The Brown Charter included the path-breaking statement that students from all religions were welcome to study at the new college. Still, the list of students who were not welcome at the college was long. It included women, atheists, African Americans and members of other minority groups. I do not know when the rule that prohibited atheists was dropped, but the first two African Americans graduated from Brown only in 1877 and the Women’s College at Brown — later named Pembroke College — opened in 1891.

And things have progressed from there. Just look around this Green! You will see men and women who represent the breadth of this country and this world. Less readily apparent are the views and interests of the people around you, which often defy stereotypes. Brown’s College for Women initially focused on preparing students for the profession of teaching, and it devoted few resources to women’s sports. The woman sitting next to you today may well be an aspiring astrophysicist, a rugby player, or both. The student on your other side may be interested in neuroscience or the digital humanities — two subjects definitely not covered in 1765.

Our student body includes veterans; parents; liberals and conservatives; and individuals from every point of the very wide income distribution that exists in this country and around the world. We still have some way to go: our faculty does not yet fully reflect the make-up of the world in which we live. But, it is clear that the Brown community today is much more true to the ideals of openness and inclusion that were expressed in Brown’s charter.

The Brown curriculum has changed; the Brown community has changed; and there is no doubt that this campus has changed and grown. And so it is worth asking, what has stayed the same? What keeps Brown being Brown?

I believe that the constant is Brown’s culture. Since its inception, Brown has embodied the ideals that were central to the founding of Rhode Island: openness, tolerance, and intellectual freedom. These ideals have created an environment that celebrates academic inquiry and discovery, culminating in the open curriculum. They have propelled Brown forward as it has become a more inclusive community. They have shaped Brown into a university that is unafraid to confront the most difficult issues that society faces.

Consider the matter of slavery. The Brown University Report on Slavery and Justice, a remarkable document published in 2006, details the University’s involvement with the deeply divisive issue of slavery. As a trading hub, Rhode Island was enmeshed in the slave economy. Some members of the Brown Corporation were slave-traders. Others were ardent abolitionists. These differences extended into the faculty and the student body. In 1790, a student named James Tallmadge gave an anti-slavery Commencement oration, although he must have known it would have drawn the disapproval of many members of the Brown community. Progress was not linear: a Commencement oration in the 1830’s, published in the college magazine The Brunonian and titled “Southern Slavery,” laid out a defense of the institution.

In hindsight, it is easy to look back and identify slavery as a dreadful evil, even though it was far from being a settled matter at the time. What I find remarkable is that Brown was able to continue as a community despite the deep divisions that the issue of slavery and abolition created. I am proud that Brown was eventually able to look back and lay out, with clarity and rigor, the University’s involvement with slavery. Later this month, we will dedicate a slavery memorial on the Quiet Green, on the other side of University Hall, so that Brown’s ties to the transatlantic slave trade will not be forgotten.

We continue to grapple with the most important issues facing society. Over its history, Brown has seen lively debate about women’s rights, civil rights, South African divestment, and access to higher education. Just last year, we had intense discussions about responses to climate change, the treatment of minority communities by police in American cities, and the best way to protect individuals from the horrendous experience of sexual assault. When I think of what we saw in the world over this past summer — from the raw pain of Ferguson, Missouri, to the complex and seemingly intractable situations in different parts of the Middle East—I know that we will have a lot to discuss this year.

These topics are not always easy, but we must confront them. Universities are designed to be places where new and sometimes conflicting ideas about social and political issues are expressed and evolve. The social and intellectual diversity of our community, which we cherish, is certain to produce strongly-held and often divergent points of view. Without question, if we do this well, you will interact with people at Brown who see the world very differently from you. At times, you will—and you should—feel uncomfortable. But if we stay true to the ideals of openness, tolerance and intellectual freedom that are baked into Brown’s DNA — if we listen to each other with open hearts and minds — we can turn difficult, often uncomfortable discussions into transformative conversations that move us forward. I hope to join you in these conversations in the coming year.

It is now my pleasure to introduce our Convocation speaker. Vicki Leigh Colvin is the 12th Provost of Brown University. Dr. Colvin comes to us from Rice University, where she was vice provost for research and the Pitzer-Schlumberger Professor of Chemistry and Chemical and Biomolecular Engineering. Dr. Colvin earned her bachelor’s degree in chemistry and physics from Stanford University, and her doctorate from the University of California-Berkeley.

Dr. Colvin combines everything one would hope to see in Brown’s Provost. She is an accomplished scholar, an award-winning teacher, and a skilled administrator. While at Rice, she served as co-director of the Richard E. Smalley Institute for Nanoscale Science and Technology, and directed the Center for Biological and Environmental Nanotechnology, one of the National Science Foundation’s first Nanoscience and Engineering Centers.

The search committee was impressed not only with Dr. Colvin’s vision and energy, but also with her good fit with Brown’s culture. I remember at one point during her interview, she was asked how she would respond to potentially divisive issues on a college campus. Her reply was spot-on. She said, “I cherish controversy.”

The title of her talk is “Fresh Eyes”