Past Recipients of the Graduate Student Contribution to Community Life Award 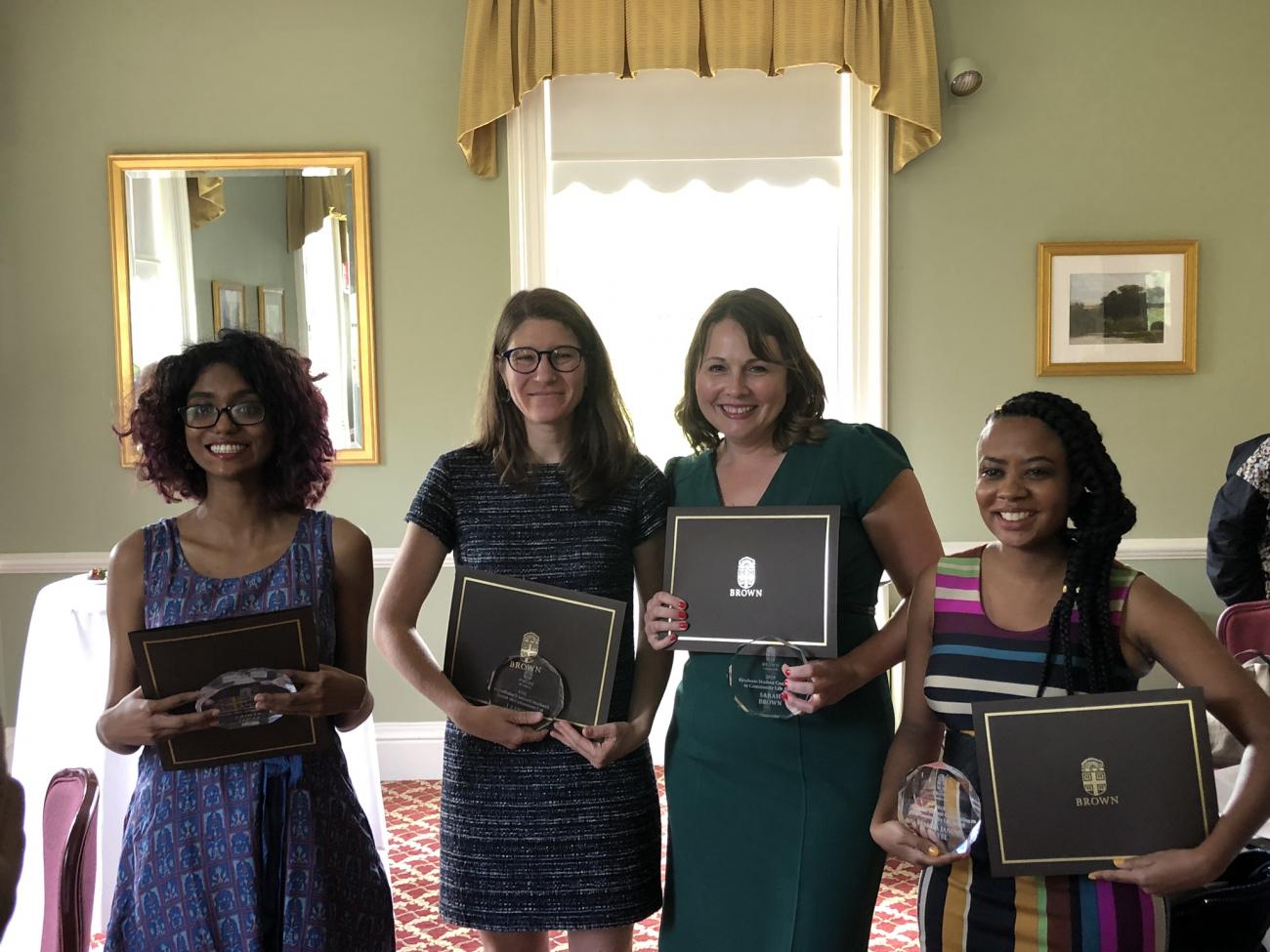 Felicia Bevel is from Rochester, NY and will be receiving a PhD from the Department of American Studies. During her time at Brown she has been a mentor and community leader, particularly for students of color. From advising underrepresented undergraduate students in the Leadership Alliance on the research and writing process to mentoring new graduate students as part of the Graduate Students of Color Peer Mentoring Program, her mentorship has taken a variety of forms. She has been deeply invested in diversity and inclusion efforts at the both the departmental and university level, serving as a graduate student representative on her department's DIAP committee and advocating for the inclusion of university-wide structural changes in the DIAP as a member of the Concerned Graduate Students of Color. Her work with the DIAP process continues through her current membership on the Graduate School's Diversity Advisory Board. And in her current role as President of the Samuel M. Nabrit Black Graduate Student Association, she and her fellow executive board members work closely with centers like the LGBTQ Center and the Brown Center for Students of Color to provide a robust and diverse set of programming for graduate students of color. Part of her investment in community building has been to continue programming that has been helpful in the past, so she was delighted to co-organize the Second Annual Graduate Students of Color Writing Retreat as a Community Fellow this year as well. While at Brown, she has also been a Ford Foundation Predoctoral Fellow and an Interdisciplinary Opportunity Fellow at the Center for the Study of Slavery and Justice. After graduation, she will be joining the University of North Florida as Assistant Professor of History, where she hopes to continue mentoring and leading initiatives in support of students from historically underrepresented groups.

Sarah Brown grew up in Phoenix, Arizona and spent most of her young adult life in New York where she majored in English at Brooklyn College and then received a Master’s degree from the CUNY Graduate Center. At Brown, she served on the Graduate Student Council Executive Board and as a departmental representative and participated in committee work such as the Rapid Planning Working Group and the Graduate Parents Working Group.  Sarah worked on DIAP planning with the Office of Institutional Diversity and Inclusion (now the OIED) as part of her training in the BEST program and served with Andrea Wright as a Graduate Community Fellow in the area of family friendly programming in 2017-2018. Their work included community building events and petitioning the university to provide more substantial support for student parents, including an improved child care subsidy structure and more affordable health care options for minor dependents. They continued this work as Graduate Parent Coordinators at the Sarah Doyle Center for Women and Gender where, among other things, they sponsored lunch talks, threw an UnValentine’s Day Party and, opened a children’s library: Stories for Free Children at Sarah Doyle. Over the past year Sarah also worked as Graduate Fellow at CareerLAB, where she helped grads build their CVs and plan their careers and organized the annual career conference GradCON, along with Michiel van Veldhuizen and Bev Ehrich. She is receiving a PhD in American Studies for her work on late twentieth-century American literature and the history of emotions. Sarah will begin her position as the Program Manager at The Women’s Center at Northwestern University this July.

Athira Sanal attended Madras Christian College in Chennai, India where she received her Bachelor's degree in physics before coming to the United States to complete her Master's degree at Brown University. During her two years at the university she has been active and involved in a number of different programs aiming to improve diversity, inclusion, and student morale. Athira worked as a Graduate Associate for the Presidential Scholars Program where her role was to be a tutor and a mentor. In PhOrg, an organization aimed at fostering community in the Physics Department, she serves as one of the three chairs and as head of the PhOrg DIAC subcommittee. In this role, Athira co-created a peer mentorship program where international students are paired with domestic students to help improve community relationships as well as facilitate new friendships. She also worked on the Social Events Planning Committee where she helped host a large variety of student events and other fun activities, including the annual Physics Department Spring Picnic. She assisted in the organizing and hosting of the Big Bang Science Fair at WaterFire where she engaged with the public, offering cool physics demonstrations and math puzzles. Last, but not least, she is a member of the Physics Department DIAP committee. Following her graduation, Athira will be going to Dartmouth College to pursue a PhD with her goal being to do research and work in cosmology. Her hope is to continue improving diversity and inclusion efforts wherever she goes and to encourage more young women to pursue a career in STEM.

Andrea Wright is from Monroe City, Missouri and will be receiving a Ph.D. in Anthropology. During her tenure at Brown, she has dedicated her time to building community, advising and mentoring, and creating sustainable programming to improve the lives of her fellow students. As a Graduate Community Fellow at the Graduate School and Grad-Parent Coordinator at the Sarah Doyle Center for Women and Gender, Andrea collaborated with Sarah Brown to build a cohesive and supportive community of graduate students who are parents. They organized the first graduate school orientation program for grad parents and as part of the Grad-Parent Working Group, they advocated for and achieved modifications to ensure that the childcare subsidy and dependent health insurance fees better serve grad parents. At the Women’s Center, Andrea and Sarah established a social justice-oriented children’s library called Stories for Free Children, organized a community panel on gender and childhood that was centered on the voices of local experts, and hosted lunch talks on topics ranging from managing conflict in personal relationships to postpartum depression and anxiety. As an Academic Administration Proctor in the Provost’s Office, Andrea played a role in helping the university reach its goal of a gender inclusive restroom in every campus building by surveying buildings, carrying out benchmarking research, and collaborating across university constituencies. Andrea has taken advantage of opportunities to mentor and advise undergraduate students, particularly those from first-generation and low-income backgrounds. She served as an academic advisor to incoming first year students and, as a first generation college student, she participated in a mentorship program that paired first-gen and low-income graduate students with undergraduate mentees. Andrea sought every opportunity to develop her ability to provide student support while creating a more diverse and inclusive educational experience. For instance, she completed the Team Enhanced Advising and Mentoring Program, a 40-hour conflict mediation course, a Storytelling for Change workshop, a Kingian Nonviolence training, and is a member of the Bias Review Team at Brown. Andrea is also intent on helping students connect what they are learning in the classroom to the world around them. She has served as a Graduate Assistant with the Royce Fellowship Program at the Swearer Center for Engaged Scholarship over the past year. In this role she assists the Faculty Director, Kevin Escudero, with programming initiatives, advising responsibilities, and community- building activities. After graduation, Andrea is pursuing a career in Student Affairs. 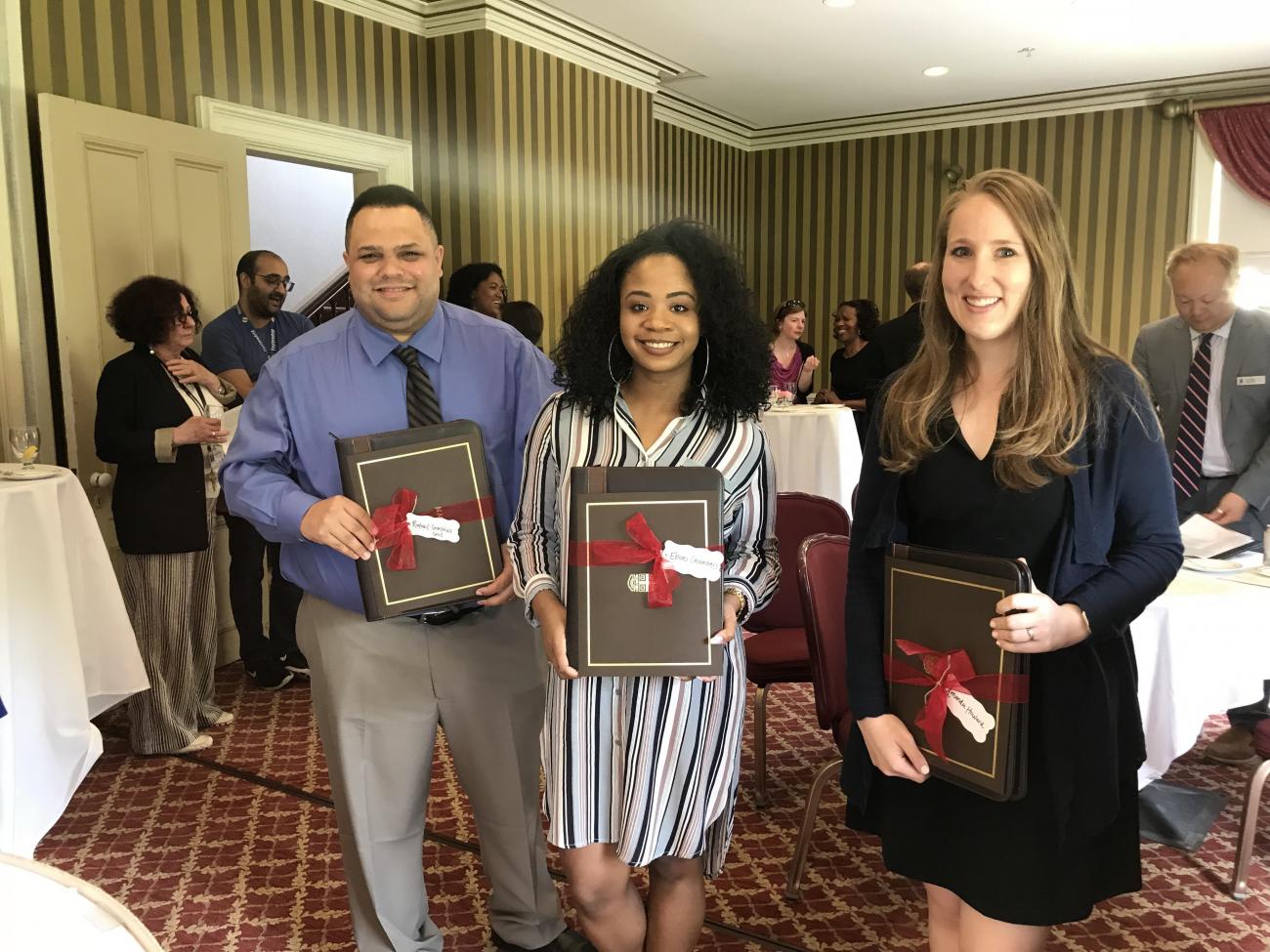 Amanda Howard is from Palo Alto, California and will be receiving a Ph.D. in Applied Mathematics. Throughout her time at Brown, Amanda has created a number of new initiatives that are innovative for how they develop community among graduate students and welcome future students to STEM careers. She has taken the lead in several efforts to help make Applied Math a more diverse field which include organizing and co-founding the Applied Mathematics Graduate/Undergraduate Mentorship Program, founding the student chapter of the Association of Women in Mathematics (AWM) which won the national AWM Student Chapter Award for Scientific Excellence under her leadership last year and organizing the Women Educators in STEM Discussion Group for the 2017-2018 academic year. Amanda has demonstrated a deep commitment to engagement, inclusion, and enhancing Brown’s teaching and learning communities through her work as a Head Teaching Consultant at the Sheridan Center for Teaching and Learning where she has served as a mentor and co-coordinator for the 40+ graduate members of the Sheridan graduate teaching consultant community, offering guidance on consulting and workshop mentorship for larger programs such as New TA Orientation. She also received the Simon Ostrach Fellowship (May 2018) for distinguished academic record. After graduation, Amanda will continue her work as a postdoc at Pacific Northwest National Laboratory starting in July 2018.

Rafael D. González Cruz is from Aguada, Puerto Rico and will be receiving his Ph.D. in Biomedical Engineering. Outside of the classroom, Rafael’s innate sense of duty and responsibility has brought him into a variety of leadership positions. These include serving as the President of the Society for Advancement of Chicanos and Native Americans in Science (SACNAS) from 2015-2017, student representative of the Initiative to Maximize Student Development Internal Advisory Board  from 2016-2018, student mentor for the Post Baccalaureate PREP Program from 2016-2017 and co-founder of the Puerto Rican Student Association in the fall of 2017. While dealing with his family’s suffering in rural Puerto Rico after Hurricane Maria, he took it upon himself to be an advocate for institutional redress and interpersonal support on campus and advocated to bring students from University of Puerto Rico to complete their studies at Brown. After graduation, Rafael hopes to become a tenure-track professor in Biomedical Engineering, Biomedical Sciences or Biotechnology and pursue original research. He is also committed to continue to mentor minority students pursuing careers in STEM, particularly helping students from Puerto Rico and other Latin American countries to gain exposure to STEM research and academic/professional development opportunities.

Eboni Chambers is from Philadelphia, Pennsylvania and will be receiving a Ph.D. in Pathobiology, and a Masters of Public Affairs through the Open Graduate Education Program. During her tenure at Brown she has been a mentor and role model for students of color and other historically underrepresented groups particularly in the STEM fields. Her involvement includes being a mentor for the Leadership Alliance Summer Research Early Identification Program, the Leadership Alliance Mellon Initiative, the African American, Latino, Asian, and Native American (ALANA) Mentoring Program and the Postbaccalaureate Research Experience Program (PREP). She was also the 2015 Graduate Advisor for the Leadership Alliance (LA) and provided novel collaborations and mentorship for students interested in the biomedical sciences. Eboni has advocated and aimed to provide community for students on color on campus, particularly in her current role as the President of the Samuel M. Nabrit Black Graduate Student Association. Moreover, Eboni’s advocacy as part of the executive board of the Graduate Student Council has directly contributed to permanent improvements in graduate student lives. She contributed to advocacy efforts that supported sixth year funding and the establishment of the Diversity and Inclusion Action Plan (DIAP). Currently, in her role as the Treasurer of the Graduate Student Council, she has advocated for and successfully increased support of graduate student conference travel, advocated for improvements to the graduate grievance processes, additional graduate exclusive spaces on campus, graduate housing, and improved parental relief policies. After graduation, Eboni hopes to use science in a meaningful way and translate scientific advances into global policy initiatives for the betterment of society.