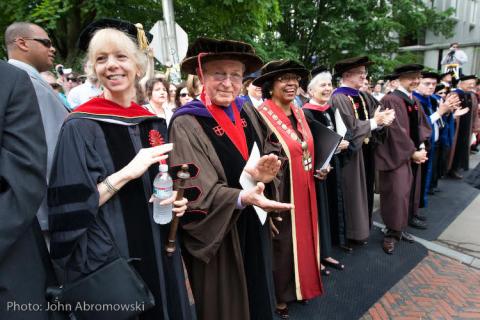 It is with great sadness that we have learned of the passing of Artemis A.W. Joukowsky, whose generosity made possible the creation of Brown University’s Institute for Archaeology and the Ancient World in 2004. The Joukowsky Institute was named in honor of Artemis and his wife, Martha Sharp Joukowsky, in 2006.

Born in Shanghai in 1930, Artemis attended Brown as an undergraduate (class ’55), which is also where he met Martha Sharp; they married in 1956. Working in insurance, they lived in Milano, Beirut, and Hong Kong, before returning to the United States and eventually, in the early 1980s, Providence and Brown University.

Artemis and Martha have a long tradition of service and benefaction to Brown University and to the field of archaeology. As Martha took up a faculty position at Brown, Artemis became increasingly involved in the University’s administration in a variety of functions that culminated in his serving as Chancellor of the University in 1997-98. He was also a tireless fundraiser and, through the Joukowsky Family Foundation, a major benefactor to the University. This included the endowment that enabled the Joukowsky Institute to start its activities in January 2006 and Rhode Island Hall to be renovated as the home of the Institute.

Both Arte and Martha have remained active friends and supporters of the Institute throughout the following fifteen years, including stopping by Rhode Island Hall to talk about plans for the Institute and to share stories of fieldwork in Petra, attending all of our graduation ceremonies, and welcoming students and faculty to their home just blocks from campus. We will sorely miss Arte’s friendship, while we thankfully remember his legacy to the discipline and on campus.

The passing of Chancellor Joukowsky