With the “Gobble” of a Turkey: Visualizing Human-Animal Relations in the Indian Ocean World

Professor Ray will also lead a breakfast forum on Tuesday, January 29 at 9 am at the Watson Institute, as part of the Center for Contemporary South Asia's Art History from the South series.

Sugata Ray, Associate Professor of South and Southeast Asian Art and Architecture at the University of California, Berkeley, presents a lecture as part of On Speculation, a year-long series that examines the past from a range of geographical perspectives and time periods. Ray’s research focuses on intersections among early modern and colonial artistic cultures, transterritorial ecologies and the natural environment.

Sugata Ray is the author of Climate Change and the Art of Devotion: Geoaesthetics in the Land of Krishna, 1550–1850 (2019); Water Histories of South Asia: The Materiality of Liquescence (2019; coedited); and Ecologies, Aesthetics, and Histories of Art (forthcoming; coedited). His current book project is titled Matter, Material, Materiality: Indian Ocean Art Histories in the Early Modern World. 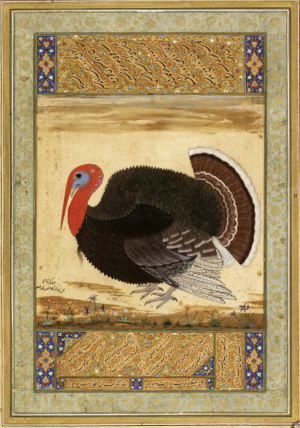 As we face the Sixth Extinction, the most devastating mass extinction event in the past sixty-six million years, can a renewed attention to human-animal relations alter art history’s speciesist bias, with its roots in Enlightenment rationality? By taking seventeenth-century paintings of the North American turkey—a bird that was introduced in the Indian Ocean world through European ecological imperialism in the Americas—as a point of departure, I speculate on the possibility of a history of art that perceives visual representations of the natural world, not merely as a technique to colonize and specimenize nonhuman life form, but as an outcome of interspecies relations that shaped artistic practices in the early modern period. My aim is to obfuscate Enlightenment species boundaries to make way for a porous art history in which the other—animal or otherwise—dwells in difference. Such a history, I propose, might offer new ways of reading artmaking that confronts the logocentric rationalism of European metropolitan art history, especially in our Anthropocene present when human hubris is leading to the mass extinction of innumerable animal species in the Indian Ocean bioworld.

PRESENTED BY THE DEPARTMENT OF THE HISTORY OF ART AND ARCHITECTURE, THE CENTER FOR CONTEMPORARY SOUTH ASIA, AND THE C.V. STARR FOUNDATION LECTURESHIP FUND