The Department of the History of Art and Architecture and the Center for Contemporary South Asia present an artist talk by Michael Rakowitz who will discuss his recent food-related projects, and his new cookbook:

A House with a Date Palm Will Never Starve: Cooking with Date Syrup: Forty-One Chefs and an Artist Create New and Classic Dishes with a Traditional Middle Eastern Ingredient

Michael Rakowitz , known for his complex and politically charged sculptures and installations, describes his art as located at the intersection of hospitality and hostility. He will discuss how his food-related art projects invite people to think about the United States and its relationship with the Middle East in a way that touches their conscience as well as their palates. He will also be available to sign his new cookbook A House with a Date Palm Will Never Starve: Cooking with Date Syrup: Forty-One Chefs and an Artist Create New and Classic Dishes with a Traditional Middle Eastern Ingredient.  A reception will include snacks from Aleppo Sweets, a Providence-based restaurant owned by Youseff Akhtarini and his family, recent refugees from Syria.

Rakowitz's award-winning artwork has often involved food - particularly food inspired by the cooking of his mother, an Iraqi-Jewish immigrant.  In his 2003 project, Enemy Kitchen, Rakowitz opened a food truck in Chicago that serves Iraqi food co-prepared by Iraqi chefs and U.S. veterans of the Iraq War.  Spoils, as 2011 culinary intervention, involved Rakowitz serving dinner at an upscale Park Avenue restaurant on dinnerware that had been looted from Suddam Hussein’s palaces.

This event is also sponsored by the Cogut Institute for Humanities, Middle East Studies, and Visual Art departments, the Joukowsky Institute, and the Program in Early Cultures. 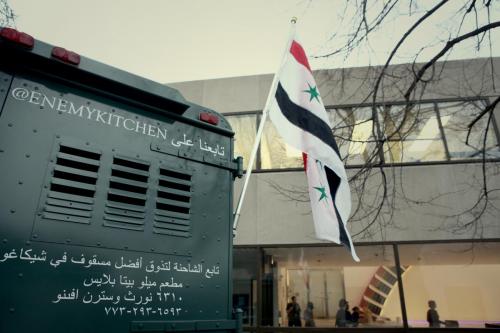 Michael Rakowitz (b. 1973, New York) is the 2020 recipient of the Nasher Prize from the Nasher Sculpture Center in Dallas. In 1998 Mr. Rakowitz initiated paraSITE, an ongoing project in which the artist custom builds inflatable shelters for homeless people that attach to the exterior outtake vents of a building’s heating, ventilation, or air conditioning system. His work has appeared in venues worldwide including dOCUMENTA (13), P.S.1, MoMA, MassMOCA, Castello di Rivoli, the 16th Biennale of Sydney, the 10th Istanbul Biennial, Sharjah Biennial 8, Tirana Biennale, National Design Triennial at the Cooper-Hewitt, and Transmediale 05. He has had solo exhibitions at Tate Modern in London, Lombard Freid Gallery in New York, Alberto Peola Arte Contemporanea in Torino, and Kunstraum Innsbruck. His public project, Return, was presented by Creative Time in New York in 2006. He is the recipient of a 2012 Tiffany Foundation Award; a 2008 Creative Capital Grant; a Sharjah Biennial Jury Award; a 2006 New York Foundation for the Arts Fellowship Grant in Architecture and Environmental Structures; the 2003 Dena Foundation Award, and the 2002 Design 21 Grand Prix from UNESCO. His work features in major private and public collections including the Museum of Modern Art, New York; Neue Galerie, Kassel, Germany; Museum of Contemporary Art, Chicago; Smart Museum of Art, Chicago; Van Abbemuseum, Endhoven, Netherlands; The British Museum; Kabul National Museum, Afghanistan; and UNESCO, Paris. His solo exhibition, The worst condition is to pass under a sword which is not one’s own was on view at Tate Modern in London in 2010. A new commission for SALT in Istanbul premiered in November 2011. Rakowitz was commissioned by Creative Time in 2011 for his project, Spoils, a culinary intervention at New York City’s Park Avenue restaurant that invited diners to eat off of plates looted from Saddam Hussein’s palaces. The project culminated in the repatriation of the former Iraqi President’s flatware to the Republic of Iraq at the behest of current Prime Minister Nuri Al Maliki on December 15, 2011—the date Coalition Forces left Iraq.  Another recent project, The Breakup, was first presented by Al Ma’mal Foundation for Contemporary Art in Jerusalem in October 2010, and was exhibited at Rhona Hoffman Gallery in Chicago in 2014. He is currently working on a new commission for the 14th Istanbul Biennial. Rakowitz is Professor of Art Theory and Practice at Northwestern University and is represented by Rhona Hoffman Gallery, Chicago; Jane Lombard Gallery, New York; and Barbara Wien Galerie in Berlin.

Preparing and then consuming this food opens up a new route through which Iraq can be discussed—in this case, through that most familiar of cultural staples: nourishment. Iraqi culture is virtually invisible in the US, beyond the daily news, and Enemy Kitchen seizes the possibility of cultural visibility to produce an alternative discourse.