Below are recent publications from the faculty: 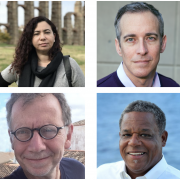 Assistant Professor Gretel Rodríguez published two new articles. One, “Before and After Rome: The Incised Contours Technique in the Art of Gallia Narbonensis,” was published in the Theoretical Roman Archaeology Journal (TRAJ).  This study reconsiders a series of Gallic and Roman monuments in southern France, highlighting the survival of indigenous traditions in the arts created after the Roman conquest of Gaul. The second, “New Observations on the Three Arches at Benevento,” was published in Selected Papers on Ancient Art and Architecture, a publication of the Archaeological Institute of America. In it, Rodríguez explores the celebrated Arch of Trajan (114 CE) in combination with two lesser known arches from Benevento, showing how they were part of the same period of urban renewal the Italian city experienced in the early second century.

Professor of the Practice, Craig Barton's article "In Plain Site: The City as Monument" was published in the Spring 2021 issue of the journal Site/Lines. Professor Barton's article examined the Edmund Pettus Bridge and its evolution into one of Selma, Alabama's most important monuments commemorating the Voting Rights Movement.

Assistant Professor Jeffrey Moser published an article, “Learning with Metal and Stone: On the Discursive Formation of Jinshixue,” which appeared this year in the collection Powerful Arguments: Standards of Validity in Late Imperial China (Brill). The article is related to a larger book project, entitled Moral Depths: Making Antiquity in a Medieval Chinese Cemetery, that he will be researching further while he is on leave next year with a fellowship at the Center for the Advanced Study of Visual Arts in Washington, DC.