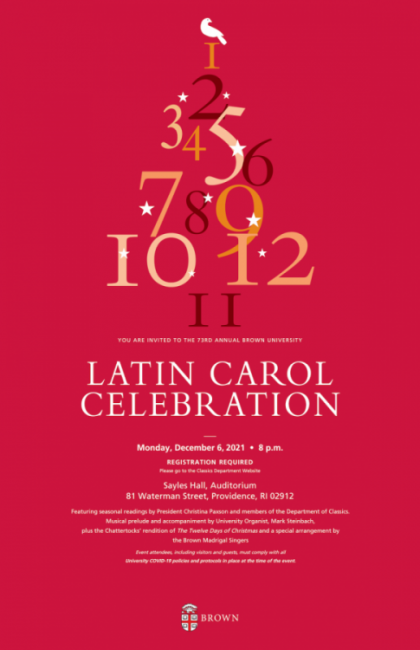 The Department of Classics held its 73rd Latin Carol Celebration on December 6, 2021 at 8 p.m., in the Sayles Hall auditorium on the Brown University campus.

Every December, on the second Monday following Thanksgiving, the Department of Classics hosts its annual program of readings and songs in the spirit of the season, conducted entirely in Latin (with some readings in Greek and Sanskrit). English translations of the readings are provided for those whose spoken Latin may be a little rusty. The Latin Carol Celebration is free and open to the public and lasts a little over an hour.

If you are unable to join us, feel free to watch the 73rd Latin Carol Celebration in the following video, or on YouTube.  You can also download the program and sing along!

History of the Latin Carol Celebration

Variously named, the Latin Carol Celebration has been held in several locations, but the format has remained remarkably the same. The audience sings carols in Latin, while members of the Brown University family read passages from ancient texts, some from the Bible, in the original languages or in Latin translation. Originally labeled a "Service," more recently the term "Celebration" has been adopted, both because celebration is more easily understood by the Latin-less and because the event was never intended primarily as a worship service.

The first Carol Service (Dec. 14, 1948, in Alumnae Hall on the Pembroke campus), set the tone for all succeeding celebrations. Music was provided by organist John Rowe Workman of the Classics Department and a chorus, directed by William Dinneen of the Department of Music. Herbert Newell Couch, chair of the Classics Department, was master of ceremonies, a term changed the next year to Magister Equitum. There were four readings that continue to this day: Isaiah 40:1-5; 9:6-7; Vergil (fourth Eclogue); Luke 2:1-14; and John 1:1-14.

Attendance in Alumnae Hall was always good, rising from an initial 300 to 400 to a reported 1,000 in 1967. In 1997, for its fiftieth anniversary, the Celebration moved to the First Baptist Church in America. In addition to Brown students and faculty, the event now attracts a large number of secondary school students, including some 100 annually from the Wahconah Regional High School in Dalton, Mass.