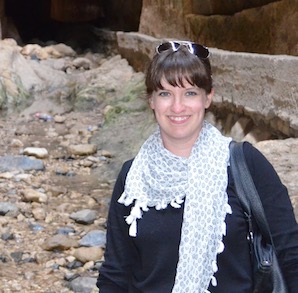 Born and raised in what Prof. Rice says, “might be best described as the middle of nowhere, Texas,” she first studied classical archaeology at the University of Illinois at Urbana-Champaign, where she was granted a BA in 2006. She then moved to the UK where she earned an M.Phil. in Classical Archaeology from the University of Oxford in 2008, and a D.Phil. in Archaeology from Oxford in 2012 (with a thesis entitled, Port Economies and Maritime Trade in the Roman Mediterranean, 166 BC to AD 300). Following the completion of her doctorate, she moved to Istanbul, Turkey where she was a Senior Fellow at Koç University’s Research Center for Anatolian Civilizations for the 2012-2013 academic year. In 2013, she moved to Scotland to join the Department of Classics at Edinburgh where she was a Lecturer (the UK equivalent of Assistant Professor) in Classical Archaeology until the summer of 2017. She joined the Department of History and Classics at the University of Alberta in the summer of 2017.

Her research focuses on Mediterranean maritime trade and economic development during the Roman period. She is particularly interested in exploring what the archaeological record reveals about the ways in which connectivity changed the nature of the Roman economy through enhanced supra-regional integration and specialized local economic development. Her research publications include articles on Roman maritime trade and shipwrecks, Mediterranean ports and harbours, Roman merchants and trading communities, and Roman villas (from pottery to mosaics).

She is an active field archaeologist and she has excavated at Etruscan, Samnite, Roman, and Medieval sites in Italy, France, and Tunisia, and spent considerable time at Roman and Late Antique sites in Turkey. At present, she co-direct the Upper Sabina Tiberina Project, focused on the excavation of a late Republican to mid Imperial villa in the Sabina. As part of this project, she ran the University of Alberta Archaeological Field School in Italy.

Please join us in congratulating Professor Rice on her new position and welcoming her to the Joukowsky Institute for Archaeology and the Department of Classics!