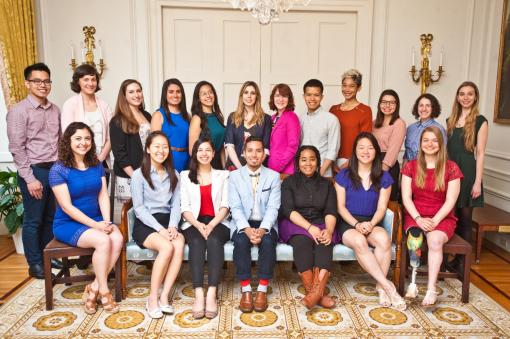 Brown's 2016 Fulbright Winners (not all are pictured)

The Dean of the College Office is proud to announce that 28 graduating seniors and recent alumni have been awarded a Fulbright scholarship.  The Fulbright Program is the flagship international educational exchange program sponsored by the U.S. government and designed to build relations between the people of the United States and the people of other countries in order to work toward world peace and collectively address global challenges.  Brown's Fulbrighters will be studying, pursuing independent research projects, or teaching overseas in 17 different countries including Argentina, Brazil, Finland, Germany, India, Korea, Japan, Spain, the United Kingdom, and Vietnam.

There are two types of Fulbright awards--research/study grants, which support independent research projects or participation in programs of study abroad, and English Teaching Assistantships, which support recent graduates in teaching English and sharing cultural and political perspectives about the U.S. abroad.  Some of Brown's 13 winners of the research/study Fulbright will be studying spinal column injury in Japan particularly among the elderly, investigating early education centers in Finland especially in neighborhoods in the capital with significant minority populations, and researching the stigmatization of mental illness in Vietnam through an analysis of both public perception and patient experience.  English Teaching Assistantship assignments vary from elementary schools to adult learning centers and from rural placements to urban ones.  Brown’s 15 English Teaching Assistantship recipients will be in a variety of placements in seven different countries.

Brown’s unique approach to undergraduate education with its emphasis on independent learning and risk taking lends itself to helping to develop young people who are well-suited to Fulbright’s mission.  Students who have been pursuing research at Brown and plan to write a thesis often develop that work into a Fulbright project proposal.  Those with an interest in teaching and some mentoring or teaching experience who are open to having a new experience in a different culture are often terrific candidates for the English Teaching Assistantship awards. The spirit of exploration and openness coupled with serious endeavor that is cultivated at Brown is the perfect recipe for a successful Fulbright application.