Associate Dean of the College for Engaged Scholarship, Executive Director of the Howard R. Swearer Center 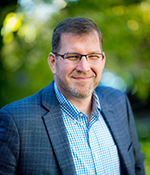 Mathew Johnson serves as the Associate Dean of the College for Engaged Scholarship and Director of the Howard R. Swearer Center for Public Service.  As Associate Dean of the College for Engaged Scholarship, Dean Johnson is responsible for facilitating and coordinating engaged scholarship activities of faculty and students. As Director of the Swearer Center, Dean Johnson provides the vision and strategic leadership for the Center.  Prior to his appointment at Brown, he was a tenured faculty member and founding director of the Center for Academic Community Engagement at Siena College.  Dean Johnson began his career as a graduate of Siena College (1993) after which he earned his Ph.D. at Brandeis University (Sociology, M.A. 2000, Ph.D. 2002).  He is committed to critical furtherance of higher education’s civic mission and believes strongly that rigorous experiential education is a fundamental to robust liberal arts and sciences.  Dean Johnson’s areas of scholarly activity include considerations of the role institutions play in creating or inhibiting personal, political, and community agency; community organization and agency in indigenous and rural communities; and development as creator/inhibitor of community agency.

Editor and Author of Deepening Community Engagement in Higher Education: Forging New Pathways (Palgrave Macmillan, 2013) and Crossing Boundaries: Tensions and Transformation in International Service-Learning (Stylus, 2014), National Endowment for the Humanities Fellowship winner (2006), and co-founder and co-principle investigator of the National Assessment of Service and Community Engagement, Dean Johnson served as Commissioner on the New York State Commission on National and Community Service (2009-2015), as a member of the President’s Advisory Committee of New York Campus Compact (2008-2015), and as the co-director of the High Impact Initiative of the Corella & Bertram F. Bonner Foundation in partnership with the New England Resource Center for Higher Education at Boston University and the American Association of Colleges and Universities.