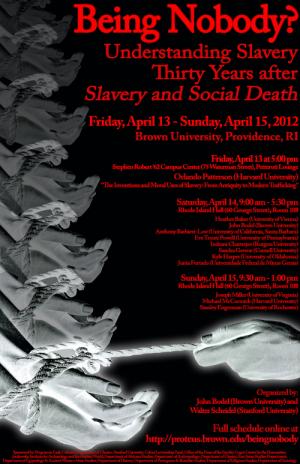 which has been in print ever since.

The first and still only full-scale comparative study of the nature of slavery, Patterson's book discusses the internal dynamics of slavery in sixty-six societies over time, ranging from tribal and ancient to modern slave systems. Patterson showed slavery to be a parasitic relationship between master and slave, invariably entailing what he defined as the violent domination of natally alienated, or socially dead, persons. The phenomenon of slavery as an institution, Patterson argued, was a single process of recruitment, incorporation on the margin of society, and eventual manumission or death. Beyond a reconceptualization of the basic master-slave relationship and a redefinition of slavery as an institution with universal attributes, Patterson rejected the legalistic concept that places the “slave as property” at the core of the system. Rather, he emphasized the centrality of sociological, symbolic, and ideological factors interwoven within the slavery system.

Interdisciplinary in its methods, this study employed qualitative and quantitative techniques from all the social sciences to demonstrate the universality of certain structures and processes in slave systems and to reveal cross-cultural variations in the slave trade, in rates of manumission, and in the status of freedmen. Slavery and Social Death laid out a vast new corpus of research that underpinned an original and provocative thesis. In his subsequent study of Freedom in the Making of Western Culture, published in 1991, Patterson expanded on his work by arguing that freedom as a value derived from the experience of slavery in the ancient world.

Thirty years after the publication of Slavery and Social Death, it is time to take stock of how Patterson’s grand synthesis has shaped the study of slavery and the ways in which scholars have developed and critiqued his ideas. Although specialized research on various slave systems has continued to proliferate in recent years, and several encyclopedic surveys that range widely across different aspects of world slavery have made diverse scholarship more accessible, explicitly global cross-cultural and comparative studies have remained rare. The current expansion of World History as an academic field highlights the need for renewed engagement with slavery as a global institution. Patterson’s work continues to provide a unique starting point for this endeavor.

We have invited a group of distinguished scholars who not only study the history of slavery in a variety of periods and regions but share a strong interest in cross-cultural perspectives. We encouraged them to reconsider the key concepts of Patterson’s study—social death, natal alienation, general dishonoring, and the integral role of manumission—and we asked them to consider how scholars have applied, modified, rejected, or replaced them in their own areas of research and how Patterson’s ideas have stood up to scrutiny within particular slave societies. We also asked if and how scholars have gone beyond Patterson’s categories. Patterson’s work stands out not only for being cross-cultural but also for bringing together anthropology, history, and sociology. Has this approach been productive? If so, has it encouraged comparable breadth in subsequent scholarship? If not, why not?