Carlo Severi: Semasiography, Picture-Writing and the Amerindian Arts of Memory

"Semasiography, Picture-Writing and the Amerindian Arts of Memory" 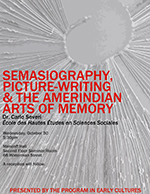 In this paper, Severi argues that the logic of Native American Indian mnemonics (pictographs, khipus) cannot be understood only from comparison with writing, but requires a comparative anthropology. Rather than trying to know if Native American techniques of memory are true scripts or mere mnemonics, we can explore the formal aspects both have in common, and compare the mental processes they call for. In this perspective, techniques of memory stop being hybrids or imprecise, and we will better understand their nature and functions as mental artifacts. This interpretation of picture-writing system can provide for a new perspective on Amerindian semasiographies, both in theoretical and in empirical terms.

Carlo Severi is an anthropologist of memory who serves as the Director of Studies at the Ecole des Hautes Etudes en Sciences Sociales (EHESS) in Paris and the Director of Research at CNRS. He pursued his doctoral degree under the tutelage of Claude Levi-Strauss at EHESS, first studying indigenous theories of mental illness and the transmission of shamanistic knowledge among the Kuna of Panama. His work has considered psychology, image,and memory from an anthropological lens, with recent publications including Paroles en Actes: Anthropologie et Pragmatique (2010), El Sendero y la Voz: Hacia una Antropologia de Memoria (2010), and Traditions et Temporalités des Images (2009).