Making a Mark: Graphs Beyond Language

Sponsored by the Program in Early Cultures at Brown University 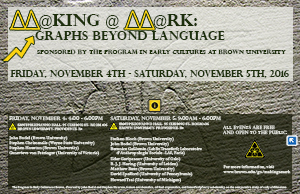 Humans have an urge, even a compulsion, to mark meaning through visible graphs. These signs range from coats of arms to emojis, potter’s marks to gang signs, and Paleolithic graphs to ISOTYPE or other cross-linguistic vehicles for communicating ideas. All can project meaning directly, without necessary recourse to language. For all their importance, however, there is little of a comparative nature to probe their use, meaning, makers, setting, and variance, or what they share as an expressive potential of all humans. In this conference, specialists in diverse scriptural and semiological systems explore semasiography, the phenomenon of non-linguistic forms of graphic communication organized into patterned, often codified ways. Talks address the techniques and systems employed in such mark-making, the media and modes of representation, and the uses and limitations of symbols and graphemes. The overall objective is to underscore the vitality of such visible signs at all times and periods, and to delight in their wondrous variety.

10:45:  “The Semiotics of Signa or the Significance of Symbols in Roman Stamps”
John Bodel (Brown University)

11:30:  “Where Credit’s Due: Andean Makers’ Marks and a Theory of Bureaucratic Games”
Howard Tsai (University of Michigan)

View Video of Each Session*: