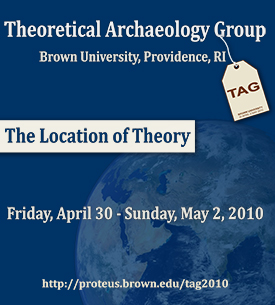 This conference, the third TAG meeting to be held in North America, was intended to bring together a diverse range of scholars and scholarly perspectives and to engender both friendly conversation and vigorous debate. In this, it stands in the long tradition of the TAG enterprise, founded in Great Britain in 1979 to encourage the exploration of inter-disciplinary theoretical issues and their application and use in archaeological interpretation.

The 2010 TAG operated around the general theme of ‘The Location of Theory’ -- an intentionally open ended rubric. A few examples of this theme include:

It can also be noted that this topic is one of close concern to Brown University’s Joukowsky Institute for Archaeology and the Ancient World, which itself is somewhat ‘out of place’ in terms of the usual disciplinary divisions and organizational structures of archaeology in North America.