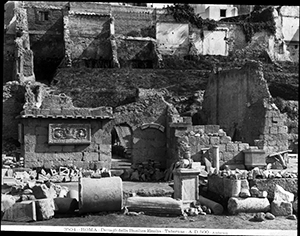 , most likely from the late 19th or early 20th century, now stored in the department's basement. Many of the slides come from publishers, including the firm of T. H. McAllister of New York, G. Sommer and Son of Naples, Frederick E. Partington, and J. Levy of Paris, who sold series of slides for educational use. The slides depict archaeological sites of Italy and Greece, as well as historical architecture of Providence, and scenes from other locations.

In 2007, as a final project for ARCH 2010 Archaeology in the 'Information Age', graduate student Adam Bravo studied these slides, and scanned several of them, with the goal of preserving some of these slides digitally, along with a bit of the experience of actually viewing them..  This project is now available online (on the Joukowsky Institute for Archaeology's website).