Brown University's Joukowsky Institute for Archaeology and the Ancient World 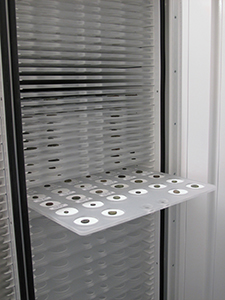 possesses an impressive collection of over 10,000 ancient Greek and Roman coins and seals, as well as a useful teaching collection of electrotypes (coin copies) and literally thousands of coin casts (the latter are useful for representing issues not found in the collection, such as items from the Medici Cabinet in Florence, and for die studies).  This collection has been slowly built up over the years, with gifts from numerous donors.

The coins reflect a wide geographical and temporal spectrum.  The Greek coins in the collection, many of which are strikingly beautiful, come from variety of mints in use during the Classical and Hellenistic periods (e.g., Syracuse, Argos, Athens, Thrace, Egypt).  Roman coins form the largest portion of the collection, ranging from the earliest Republican bronzes (Aes grave) to Republican and Imperial silver and bronze coins from mints in Rome and the provinces.  Coins from the Roman mint at Alexandria, Egypt, notably in silver denominations, are particularly well represented.  Two large hoards augment the collection: a hoard of 45 imperial Persian sigloi (silver oval coins) and a hoard of 196 late Roman bronze coins.  The collection also includes lead coins from Carthage (Tunisia), as well as Byzantine and Islamic issues, which are extremely useful for offering both artistic and technical comparanda to the bulk of the collection.

In the Spring of 2014, the students in Alicia Jimenez's course, "Lost and Found: Roman Coins," were assigned to create a prototype for an online catalog of the Institute's numismatic holdings.  This preliminary student research can be found at https://brown.edu/Departments/Joukowsky_Institute/resources/coins/index.....

The coins are kept in secure storage in Rhode Island Hall, and can be accessed by researchers by emailing the Institute and requesting an appointment.