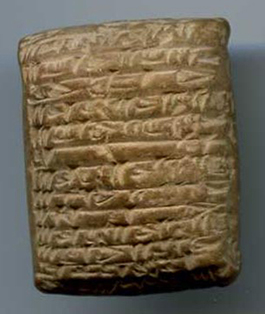 The oldest objects in the Library's Special Collections are several cuneiform tablets, which feature text in Sumerian and Babylonian, estimated to date from approximately 2000 BCE.  Library staff has determined that the tablets are temple records.

There are very few public municipal collections in the U.S. that house pre-1600 manuscripts, but the Providence Public Library is one of them.  Recently, the manuscripts at the Public Library were made available through Digital Scriptorium. In addition to a few Ege leaves, the collection includes a codex that is extremely rare, one of only five of its kind: Wetmore MS 1. This late fifteenth-century Bible was written in Germany using a rebus-like system of mnemonic symbols and images. This is a fascinating manuscript, worthy of significant study, with mysterious iconographic treatments and delightful miniatures throughout.  The Public Library also owns a very fine late fifteenth-century Dutch Book of Hours, Wetmore MS 2. 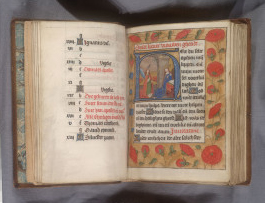 are part of the Library's Edith Wetmore Collection of Children's Books.  In the 1950s, Miss Edith Wetmore, of Newport, gave the Library her collection of some 1,850 early children’s books in 20 languages. Among the highlights of the collection are a 15th century manuscript written in Germany and illustrated with many small illustrations relating to the Bible, a unique copy of a Latin grammar printed in 1499, and the rare first edition, first issue, of Beatrix Potter’s The Tale of Peter Rabbit.

During the same period Miss Wetmore also gave the Library a collection of some 400 illustrated books, a collection of books designed by Bruce Rogers and a collection of books printed at the Peter Pauper Press. The books designed by Bruce Rogers and the Peter Pauper Press books were added to the Updike Printing Collection. The collection of illustrated books is particularly strong in livres d’artistes, among which are books illustrated by Bonnard, Matisse, Picasso and Rouault, as well as others. Several of the books in this collection are beautifully bound. The collection also contains some fine examples of private press books printed by the Ashendene Press, the Golden Cockerell Press, the Cranach Presse of Weimar, Germany, and the Gregynog Press of Wales.

Also of particular interest is The Nickerson Architectural Collection, which comprises books on architecture dating from the 1700s to the twentieth century, including titles by Piranesi, Palladio, Vitruvius, Owen Jones, Inigo Jones and others. There are also many illustrated works relating to travel, costume and design.