The following list of university events held on Brown's campus relevant to the study of East Asia will be updated periodically by semester, with events listed from earliest to latest.

A comparative forum on the global contexts of 1930s and 1990s Chinese and European debates on the idea of the 'economic.' Rebecca Karl (NYU) will present her new book, The Magic of Concepts: History and the Economic in Twentieth Century China (2017). Carl Wennerlind (Barnard), a historian of European economic philosophy, and Rebecca Nedostup (Brown), a modern China scholar, will respond.  All welcome. 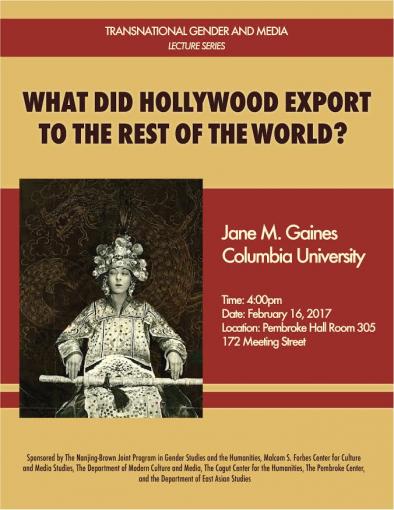 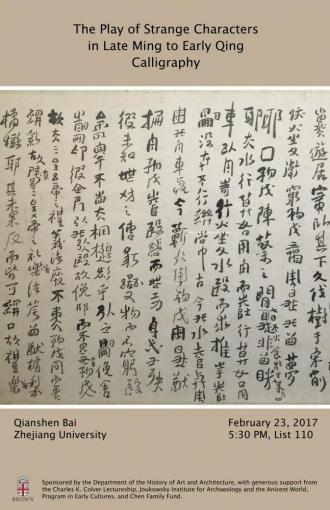 Professor Bai is a world-renowned expert on the "Epigraphic Tradition" (beixue) of late imperial Chinese calligraphy.

Sponsored by the History of Art and Architecture Department, with support from the Joukowsky Institute, Program in Early Cultures, and Chen Family Fund.

Monday March 6
Florence Hsia (University of Wisconsin-Madison)
The Problem of 20(K): What is Chinese Astronomy Good For?
4pm
Petteruti Lounge

At once admirably empirical and disappointingly anti-theoretical, thrillingly modern and thuddingly antiquated, China’s astronomical traditions have served as a foil for developing conceptions of scientific progress from the early modern period through the present. This paper explores the case of Chinese astronomy as one of the principal and paradoxical ‘others’ in the history of science as a modern discipline, and asks how we might remobilize it in order to think anew about the global processes and agents of translation through which its history has been written.

Sponsored by the Science and Technology Studies Program. 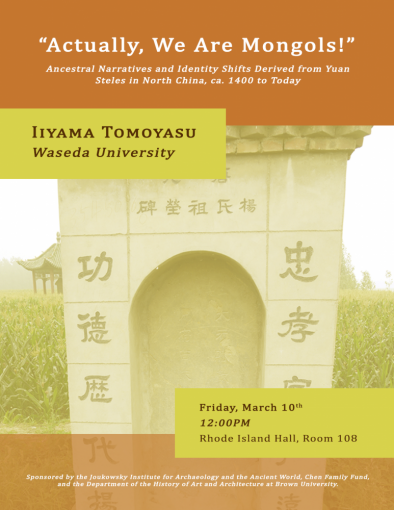 Sponsored by the Joukowsky Institute for Archaeology and the Ancient World, Chen Family Fund, and the History of Art and Architecture Department.

Wu Hung is Harrie A. Vanderstappen Distinguished Service Professor of Art History, East Asian Languages and Civilizations, and the College at the University of Chicago, where he also serves as the Director of the Center for the Art of East Asia. He has published extensively in the fields of pre-modern, modern, and contemporary Chinese art, and curated numerous exhibitions in Asia, Europe, and the United States. His books include A Story of Ruins: Presence and Absence in Chinese Art and Visual Culture (Princeton, 2012), The Art of the Yellow Springs: Rethinking Chinese Tombs (Hawai’i, 2010), The Double Screen: Medium and Representation in Chinese Painting (Chicago, 1996), and Monumentality in Early Chinese Art and Architecture (Stanford, 1995), among others.

Sponsored by the History of Art and Architecture Department.

Ven. Dr. Yifa was born in Taiwan, holds a law degree from National Taiwan University, and earned a Ph.D. in Religious Studies from Yale University in 1996. In addition to her monograph The Origins of Buddhist Monastic Codes in China published under the prestigious Kuroda imprint at University of Hawai’i Press, she has authored or co-authored three additional books and numerous essays. She is widely regarded as an expert in the history of Buddhist law. Yifa is the former chair of the Department of Religious Studies at the University of the West in Los Angeles.

Since stepping down from teaching, Yifa relocated to China where she founded the Woodenfish Foundation, a non-profit organization dedicated to programming for international academic exchange and scholarly dialogue with Chinese Buddhist monastic institutions. Woodenfish has been one of the few such organizations to flourish in mainland China and has enabled over 1,000 American scholars and students to visit contemporary Chinese Buddhist temples and historical sites. In her talk at Brown, titled “Buddhism in Contemporary China,” Yifa will share her scholarly and personal observations based on nearly ten years’ experience of successful programming and operations. This talk will provide current information from someone on the ground and prove an important contribution to understanding how Buddhism is flourishing in the new modern China.

For more information, you may visit:
http://www.woodenfish.org/the-founder 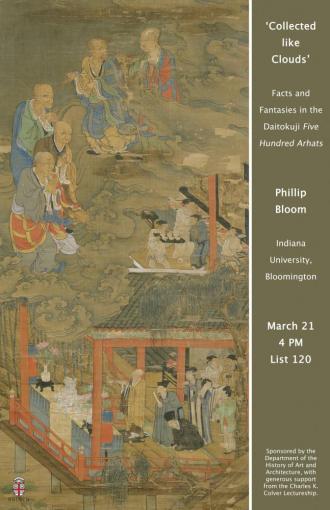 Buddhist art makes an uneasy object of social historical analysis. Although we might hope that textual archives will provide direct insight into an artwork’s visual form, the fragmentary nature of the documentary record invariably frustrates such desires, rarely requiting our fascination with the visual imaginaire that structures the artwork. Nevertheless, it is to social historical analysis that we must turn for the fundamental facts upon which subsequent interpretation may rest. A dialectic, then, is necessary—a movement from social fact to visual fantasy and back again. Focusing on two paintings from a set of one hundred crafted between 1178 and 1188 near the important Chinese port of Ningbo, this presentation will engage in precisely such a dialectical analysis. This set of paintings, now largely held in Daitokuji Monastery, Kyoto, Japan, depicts saintly monks (arhats) both engaged in the mundanities of Chinese Buddhist monastic life and performing supramundane feats that transcend space and time. To make sense of these paintings, this presentation will first investigate the specific social and economic contexts within which the works were produced. Challenging the inherent interpretive limits of such an approach, which has hitherto dominated scholarship on the set, we shall turn our attention to the sensory imagination of ritual that underlies the artworks, engaging with both the material facts and mental fantasies embodied in the paintings. Ultimately, this presentation will illuminate the ways in which the set simultaneously roots us in social reality and opens to us visions otherwise accessible only to the most gifted monastic gazers.

Phillip E. Bloom is Assistant Professor of East Asian Art in the Department of Art History at Indiana University, Bloomington. He specializes in the history of Chinese Buddhist art and ritual, particularly of the Song dynasty (960–1279). He is currently completing a book manuscript on the multi-sensory imagination of Song Buddhist ritual art, which is tentatively entitled, “Nebulous Intersections: Ritual and Representation in Chinese Buddhist Art, ca. 1178.” Publications related to this project have recently appeared in The Art Bulletin, Dazu Studies (Dazu xuekan), and Ars Buddhica (Bukkyō geijutsu).

Sponsored by the History of Art and Architecture Department, with support from the Charles K. Colver Lectureship.

In the standard telling of Chinese and Indian histories, the two societies were closely connected in the first millennium AD, when Chinese pilgrims traveled to India in search of authoritative Buddhist texts. But this connection, which fundamentally reoriented Chinese culture, is supposed to have withered in the centuries after the first millennium, presumably because of Muslim conquests of the Tarim Basin and the Punjab. Indeed the story of Chinese-Indian connection disappears almost entirely from general histories until the 20th century. In this lecture, Rian Thum argues instead that Islamic networks played an important role in maintaining ties between China and India from the 16th century to the present. Such ties have gone unnoticed in part because Islam is so often ignored as a part of Chinese culture. More importantly, the study of Chinese Islam itself has been distorted by an overwhelming focus on Chinese-language texts. The surprising reemergence of Sino-Indian connection via Islamic networks demonstrates the potential for a history of Islamic China that gives due attention to the numerous cosmopolitan Persian, Turkic, and Arabic texts that have been fundamental to Chinese Islamic practice.

Sponsored by the Center for Contemporary South Asia and the East Asia Colloquium.