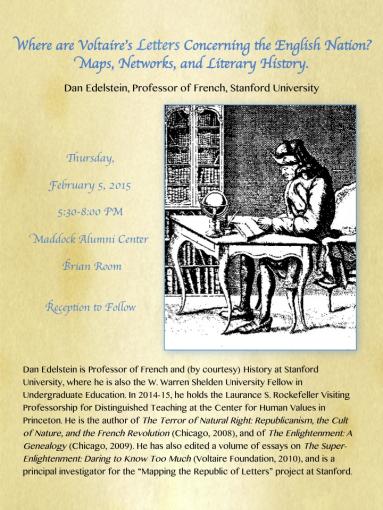 A long-standing narrative holds that Voltaire’s two-year exposure to English ideas transformed the Frenchman into a philosophe, as evidenced by the publication of his Letters Concerning the English Nation, better known as the Lettres philosophiques (1734). On the actual map of Voltaire’s correspondence, however, England is a “coldspot,” a place with which little correspondence was exchanged. In this talk, I explain this discrepancy by arguing that the England Voltaire cared about only existed in the past – and, what’s more, that it was in many respects a reflection of his beloved France.

Bio:
Dan Edelstein is Professor of French and (by courtesy) History at Stanford University, where he is also the W. Warren Shelden University Fellow in Undergraduate Education. In 2014-15, he holds the Laurance S. Rockefeller Visiting Professorship for Distinguished Teaching at the Center for Human Values in Princeton. He is the author of The Terror of Natural Right: Republicanism, the Cult of Nature, and the French Revolution (Chicago, 2008), and of The Enlightenment: A Genealogy (Chicago, 2009). He has also edited a volume of essays on The Super-Enlightenment: Daring to Know Too Much (Voltaire Foundation, 2010), and is a principal investigator for the “Mapping the Republic of Letters” project at Stanford.