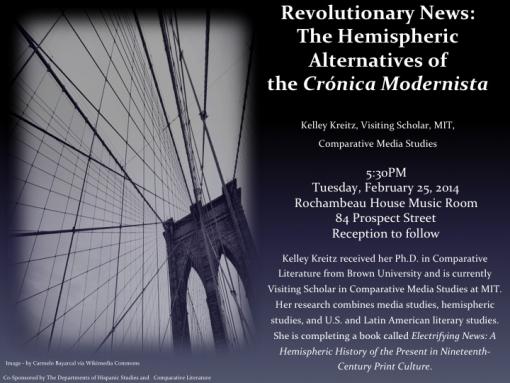 Abstract:
The crónica modernista is best known today for its role in imagining an autonomous literary discourse in Latin America that was conditioned by variations throughout the region in the adoption of new media technologies and the establishment of publishing and educational institutions. In the context of nineteenth-century media change, a regional literary field was not the only possibility that the genre represented. As a genre with multiple sites of production that stretched from Buenos Aires to Havana to New York City, the crónica also provided a platform for imagining a hemispheric community of writers and editors. As they participated in local newspapers and periodicals, this community of writers and editors engaged in debates about the future of news that circulated throughout the Americas in the 1880s and 1890s.
An analysis that brings together crónicas by Julián del Casal and other writers for the Havana-based periodical La Habana elegante and by José Martí in New York showcases the way in which cronistasenvisioned alternative spaces for news. In addition, reanimating the crónica’s hemispheric alternatives offers insight into the interrelations of media practices and the formation of notions of identity, community, and the possibilities for social and political change.

Bio:
Kelley Kreitz received her Ph.D. in Comparative Literature from Brown University and is currently Visiting Scholar in Comparative Media Studies at MIT. Her research combines media studies, hemispheric studies, and U.S. and Latin American literary studies. She is completing a book called Electrifying News: A Hemispheric History of the Present in Nineteenth-Century Print Culture.