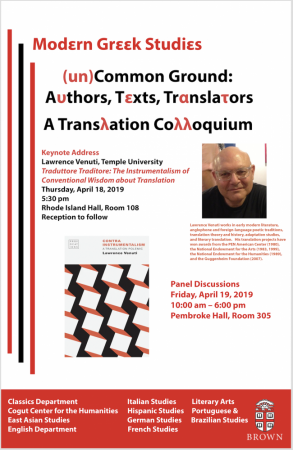 This will be a two-day, translation colloquium Thu, April 18th - Fri, April 19th.  The keynote address will be delivered by Lawrence Venuti (Temple University) on Thursday evening, with discussion panels on Friday.

Lawrence Venuti works in early modern literature, anglophone and foreign-language poetic traditions, translation theory and history, adaptation studies, and literary translation. His translation projects have won awards from the PEN American Center (1980), the National Endowment for the Arts (1983, 1999), and the Guggenheim Foundation (2007).

Amanda Michalopoulou is the author of eight novels and three short story collections. She has been a contributing editor at Kathimerini in Greece and Tagesspiegel in Berlin. Her stories have appeared in Harvard Review, Guernica, PEN magazine, World Literature Today, Words Without Borders, Asymptote, The Guardian, Brooklyn Rail among others.

She is a winner of the Revmata Award (1994), the Diavazo Award for her novel «Jantes »(1996) and the Academy of Athens Prize for her short story collection “Bright Day” (2013). The American translation of her book “I’d Like” won the International Literature Prize by NEA in the US (2008) and the Liberis Liber Prize of the Independent Catalan Publishers (2012). Her stories and essays have been translated into sixteen languages. Her short story Mesopotamia was selected for Best European Fiction 2018, by Dalkey Archive. Dalkey will also publish her novel “God's wife” in 2020. “Why I killed my best friend”, her latest book in translation, was short-listed for the National Translation Award in the US.

She currently lives in Athens, Greece where she teaches creative writing.

Konstantinos Poulis studied Sociology and Greek Drama in Greece and in Britain. His publications include theatre plays, short stories and essays on politics and philosophy. He is the Editor in Chief at ThePressProject and is best known for his political and cultural commentary and analysis of issues related to the ongoing Greek government-debt crisis. He is also host and head writer of the television show Anaskopisi (Roundup).

Ersi Sotiropoulos is the author of sixteen books of fiction and poetry. Her work has been translated into many languages, and has been awarded in Greece with the National Book Prize twice, the Book Critics’ Award and the Athens Academy Prize, and has been shortlisted for the European Book Prize. She has written scripts for film and television and participated in exhibitions of Visual Poetry. She served for nine years as the cultural attaché for the Greek Embassy in Rome and has been a fellow at the University of Iowa’s International Writing Program, Princeton University, Schloss Wiepersdorf in Germany, Villa Yourcenar in France and others. Her novel What’s Left of the Night won the Prix Méditerranée Étranger 2017 in France. 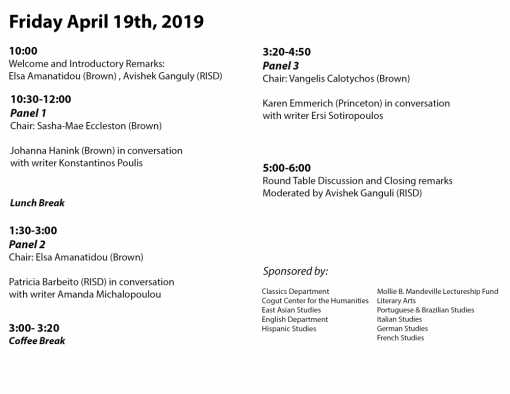 Please join us for this exciting event!  This event was made possible by the generous support of the Department of Classics, Cogut Center for the Humanities, Mollie B. Mandeville Lectureship Fund, East Asian Studies, English Department, Italian Studies, Hispanic Studies, German Studies, French Studies, Literary Arts, and Portuguese & Brazilian Studies.