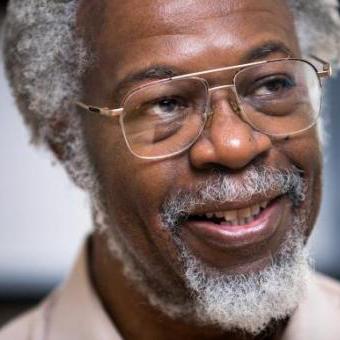 Walk down the street with Jim Gates, Brown University’s newly appointed Ford Foundation Professor of Physics, and you immediately know you are in the presence of a person of consequence. You can see it in the faces of students and other pedestrians as they walk by -- the instant spark of recognition followed by the slow dawning realization of why his face looks familiar. “A lot of people mistake me for Morgan Freeman,” Gates says modestly, “which I have trouble understanding, because I don’t have any freckles.” What Gates does share with Freeman is a deep, resonant voice that conveys gravitas, although it is coupled with an occasional slightly bemused tremor, as if he is stifling a secret chuckle that holds the keys to the secrets of the universe.

Gates’ voice will soon enthrall Brown undergraduates when he begins teaching PHYS0100 “Flat Earth to Quantum Uncertainty: on the Nature and Meaning of Scientific Explanation” in the Fall of 2018. The course, previously taught by Nobel Laureate Leon N Cooper, probes the deep issues of physics in a way that is accessible to non-science concentrators while still being of interest to those already well versed in the discipline of physics. Gates, whose face and voice are familiar from television's NOVA, and numerous other public appearances already has years of experience making the most difficult ideas in physics accessible to the public.

Gates, a 2013 recipient of the National Medal of Science, comes to Brown from the University of Maryland, where he was a Distinguished University Professor, University System of Maryland Regents Professor, John S. Toll Professor of Physics, and Director of the Center for String and Particle Theory. He also recently completed a residency at the MIT Center for Theoretical Physics, the institution from which he previously earned his BS and PhD degrees. Gates is well known for his pioneering work in supersymmetry and supergravity, and his 1977 doctoral dissertation on supersymmetry earned him a prominent place in the early development of the field, as did the 1984 book he co-authored, Superspace, or One thousand and one lessons in supersymmetry, which is widely considered the first comprehensive book on the subject.


His study of string theory and supersymmetry has recently led Gates to develop an interest in what are called adinkras. Adinkra symbols are graphical representations of supersymmetric algebras named after symbols created by the Asante people. Adinkras may help us understand the structure of the universe, although Gates cautions, “most of the time when we make up ideas, they’re wrong. However, when we get it right, it’s amazing.”

Gates is also a pioneer in another respect, having been the first African American to hold an endowed chair in physics at a major U.S. research university. He comes to Brown with a mission to increase the participation of historically underrepresented groups in the sciences, but has no plans to leave his research behind, “I am currently working on three more scientific research papers, at least. I may be doing the best research of my life as I enter this fall and winter of my career. Physics is still great fun for me.” As Ford Foundation Professor of Physics, Gates says he plans to interact with researchers across a number of disciplines at the University including, “physics, mathematics, public policy, and maybe computer science/information theory, along with some sort of genetics or evolutionary biology.”

A former scientific advisor to President Barack Obama, Gates is also a member of the National Academy of Sciences, as well as the board of trustees of Society for Science & the Public, and one of the USA Science and Engineering Festival's “Nifty Fifty.” Gates is typically modest when asked why he made the move to Brown: “At age sixty-six, I find I am still chasing dreams and new adventures. This seems so odd. When I was young, every adult I knew retired when they were sixty-five. When the possibility of this change first appeared, I kept asking close friends, why would Brown be interested in an ‘old car’ like me. Finally, one of them explained, ‘Jim, you are not an old car, but an antique car and those are valuable.’”