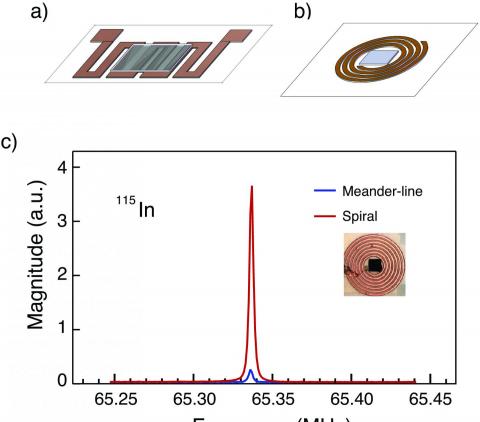 Brown University researchers show how nuclear magnetic resonance probes can be optimized for studying the properties of nanomaterials and strange states of matter.

NMR involves applying a strong magnetic field to sample and then zapping it with pulses of radio waves. The magnetic field aligns the magnetic moments, or “spins,” of atomic nuclei within the sample. The radio waves will flip the spins of certain nuclei in the opposite direction, depending on the frequency of the waves. Scientists can use the signal associated of spin flips at different frequencies to create images or to determine a sample’s molecular structure.

“NMR is a very useful technique, but the signal you get is very weak,” said Vesna Mitrovic, an associate professor of physics and the senior author of the research, which is published in Review of Scientific Instruments. “To get a usable signal, you need to detect a lot of spins, which means you need a lot of material, relatively speaking. So much of the work we’re doing now in physics is with thin films that are part of small devices or materials that have tiny crystals with odd shapes, and it’s really difficult to get an NMR signal in those cases.”

Part of the problem has to do with the geometry of the probe used to deliver the radio pulses and detect the associated signal. It’s usually a solenoid, a cylindrical coil of wire inside of which the sample is placed. The NMR signal is strongest when a sample takes up most of the space available inside the cylinder. But if the sample is small compared to the volume of the cylinder — as thin films and nanomaterials would be — the signal weakens to nearly nothing.

But for the past few years, Mitrovic’s lab at Brown has been using flat NMR coils for a variety of experiments aimed at exploring exotic materials and strange states of matter. Flat coils can be placed directly on or very close to a sample, and as a result they don’t suffer from the signal loss of a solenoid. These types of NMR coils have been around for years and used for some specific applications in NMR imaging, Mitrovic says, but they’ve not been used in quite the same way as her lab has been using them.

For this latest research, Mitrovic and her colleagues showed that flat coils are not only useful in boosting NMR signal, but that different geometries of flat coils can maximize signal for samples of different shapes and in different types of experiments.

For instance, in experiments using thin-films of the semiconductor indium phosphate, the researchers showed that very small samples yield the most signal when placed at the center of flat, circular coil. For larger samples, and for experiments in which it is important to vary the orientation of the external magnetic field, a meander-line shape (a line that makes a series of right-angle turns) worked best.

Another advantage to flat coils is it gives experimenters access to their sample, as opposed to having it caged inside a solenoid.

“Many of the states we’re interested in are induced by manipulating the sample — applying an electric current to it or applying a stress to it,” Mitrovic said. “The flat coils make it much easier to be able to do those manipulations.”

Mitrovic hopes the guidance this research provides in how to optimize flat coils will be useful to other physicists interested in using NMR to investigate exotic materials and states of matter.

Mitrovic’s co-authors were Wencong Liu and Lu Lu, both from the Brown. The research was supported by a grant from the National Science Foundation (DMR-1608760).

This article originally appeared in News from Brown