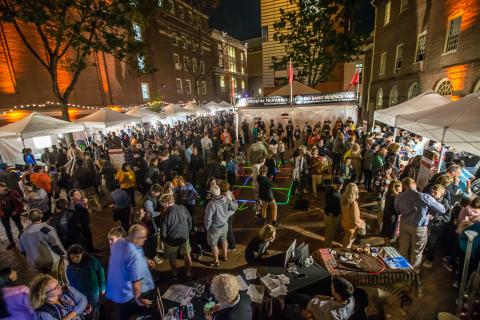 The public enjoyed the activities promoting the intersection of art, music, and science and some five thousand people of all ages participated in the Market Square events.

Providence, RI - On Saturday, September 22, the Big Bang Science Fair at WaterFire Providence brought many activities at the intersections between science and the arts to our community. The idea, conceived by Brown Physics Professor, Meenakshi Narain, was to promote the role of science in society. Her vision for the event was to “broaden the public perspective of science in our world, highlight the diversity of scientific research, and encourage individuals to creatively engage in STEM fields.” For one exciting day, scientists teamed up with musicians, programmers, artists, and chefs to explore the wonders of science. 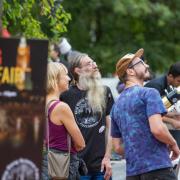 The role of science in our daily lives was highlighted by stellar presentations from Professor Karla Kaun (Brown Neuroscience) on “How Drugs rewire your Brain” and Professor Jim Gates on “Understanding our Universe?,” together with an interesting line-up of topics like “Find your way without using GPS”, “Making Music from Real-Time Scientific Data”, and “Science-fiction soundtracks & Espionage: The Theremin’s Odyssey.”  Micky Dolenz (from the legendary band The Monkees) shared his enthusiasm about science with the public. A Jazz performance by Professor Stephon Alexander (and the GOD PARTICLE band) capped the event. 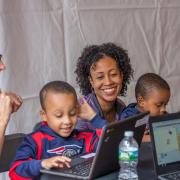 Interactive workshops at THE LAB in Market Square engaged participants in designing their own games, talking to the BB-8 droid, defeating zombies, playing the Theremin musical instrument without touching it, and build ing cloud chambers to “see the cosmic rain.” Throughout the evening, kids and adults alike were engaged in hands-on activities melding art and science in the Market Square. They explored concepts in neuroscience, computer science, physics, chemistry, the science of cooking and made their own gadgets through interactive exhibits. Astronomers captivated the public via a large number of telescopes lined up along the river. The audience was enthralled by the opportunity to snap selfies in the "tunnel" of the Large Hadron Collider and the artwork depicting the CMS detector at CERN, Switzerland.

The Brown University team was joined by colleagues from the CERN lab in Switzerland, the University of Durham, URI, Bryant University, UMass Amherst, RIMOSA, RIVR, and many individuals from the Providence community. The event was sponsored by the Office of the President, Provost, and many units within Brown University. Support was also provided by Citizens Bank and CS4RI.

Click here to view photos from the event  /  Timelapse video