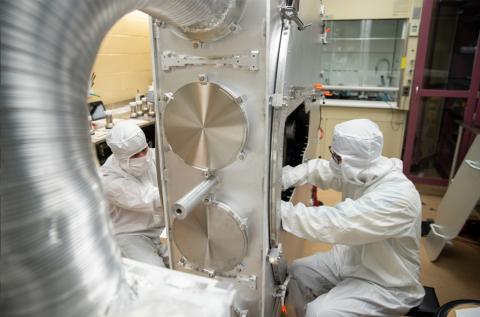 Two arrays of 494 large-area, light-sensing photomultiplier tubes, critical parts of the LUX-ZEPLIN dark matter detector, have arrived in South Dakota, where the detector will start its search in 2020.

PROVIDENCE, R.I. and LEAD, S.D. — The LUX-ZEPLIN (LZ) dark matter detector, which will soon start its search for the elusive particles thought to account for a majority of matter in the universe, had the first of its “eyes” delivered late last week.

The first of two large arrays of photomultiplier tubes (PMTs) — powerful light sensors that can detect the faintest of flashes — arrived last Thursday at the Sanford Underground Research Facility (SURF) in Lead, South Dakota, where LZ is scheduled to begin its dark matter search in 2020. The second array will arrive in January. When the detector is completed and switched on, the PMT arrays will keep careful watch on LZ’s 10-ton tank of liquid xenon, looking for the telltale twin flashes of light produced if a dark matter particle bumps into a xenon atom inside the tank.

The two arrays, each about 5 feet in diameter, were shipped to South Dakota via truck from Providence, Rhode Island, where a team of researchers and technicians from Brown University spent the past six months painstakingly assembling them.

“The delivery of these arrays is the pinnacle of an enormous assembly effort that we’ve executed here in our cleanroom at the Brown Department of Physics,” said Rick Gaitskell, a professor of physics at Brown University who oversaw the construction of the arrays. “For the last two years, we’ve been making sure that every piece that’s going into the devices is working as expected. Only by doing that can we be confident that everything will perform the way we want when the detector is switched on.”

The Brown team has worked with researchers and engineers from the U.S. Department of Energy’s Lawrence Berkeley National Laboratory (Berkeley Lab) and from Imperial College London to design, procure, test, and assemble all of the components of the array. Testing of the PMTs, which are manufactured by the Hamamatsu Corporation in Japan, was performed at Brown and at Imperial College “The PMTs have already qualified for significant air miles, even before they started their 2,000-mile journey by road from Rhode Island to South Dakota,” Gaitskell said.

Nobody knows exactly what dark matter is. Scientists can see the effects of its gravity in the rotation of galaxies and in the way light bends as it travels across the universe, but no one has directly detected a dark matter particle. The leading theoretical candidate for a dark matter particle is the WIMP, or weakly interacting massive particle. WIMPs can’t be seen because they don’t absorb, emit or reflect light. And they interact with normal matter only on very rare occasions, which is why they’re so hard to detect even when millions of them may be traveling through the Earth and everything on it each second.

The LZ experiment, a collaboration of more than 250 scientists worldwide, aims to capture one of those fleetingly rare WIMP interactions, and thereby characterize the particles thought to make up more than 80 percent of the matter in the universe. The detector will be the most sensitive ever built, 50 times more sensitive than the LUX detector, which wrapped up its dark matter search at SURF in 2016.

The PMT arrays are a critical part of the experiment. Each PMT is a six-inch-long cylinder that is roughly the diameter of a soda can. To form arrays large enough to monitor the entire LZ xenon target, hundreds of PMTs are assembled together within a circular titanium matrix. The array that will sit on top of the xenon target has 253 PMTs, while the lower array has 241.

PMTs are designed to amplify weak light signals. When individual photons (particles of light) enter a PMT, they strike a photocathode. If the photon has sufficient energy, it causes the photocathode to eject one or more electrons. Those electrons strike then an electrode, which ejects more electrons. By cascading through a series of electrodes the original signal is amplified by over a factor of a million to create a detectable signal.

LZ’s PMT arrays will need every bit of that sensitivity to catch the flashes associated with a WIMP interaction.

“We could be looking for events emitting as few as 20 photons in a huge tank containing 10 tons of xenon, which is something that the human visual system wouldn’t be able to do,” Gaitskell said. “But it’s something these arrays can do, and we’ll need them to do it in order to see the signal from rare particle events.”

The photons are produced by what’s known as a nuclear recoil event, which produces two distinct flashes. The first comes at the moment a WIMP bumps into a xenon nucleus. The second, which comes a few hundred microseconds afterward, is produced by the ricochet of the xenon atom that was struck. It bounces into the atoms surrounding it, which knocks a few electrons free. The electrons are then drifted by an electric field to the top of the tank, where they reach a thin layer of xenon gas that converts them into light.

In order for those tiny flashes to be distinguishable from unwanted background events, the detector needs to be protected from cosmic rays and other kinds of radiation, which also cause liquid xenon to light up. That’s why the experiment takes place underground at SURF, a former gold mine, where the detector will be shielded by about a mile of rock to limit interference.

The need to limit interference is also the reason that the Brown University team was obsessed with cleanliness while they assembled the arrays. The team’s main enemy was plain old dust.

“When you’re dealing with an instrument that’s as sensitive at LZ, suddenly things you wouldn’t normally care about become very serious,” said Casey Rhyne, a Brown graduate student who had a leading role in building the arrays. “One of the biggest challenges we had to confront was minimizing ambient dust levels during assembly.”

Each dust particle carries a minuscule amount of radioactive uranium and thorium decay products. The radiation is vanishingly small and poses no threat to people, but too many of those specks inside the LZ detector could be enough to interfere with a WIMP signal.

In fact, the dust budget for the LZ experiment calls for no more than one gram of dust in the entire 10-ton instrument. Because of all their nooks and crannies, the PMT arrays could be significant dust contributors if pains were not taken to keep them clean throughout construction.

The Brown team performed most of its work in a “class 1,000” cleanroom, which allows no more than 1,000 microscopic dust particles per cubic foot of space. And within that cleanroom was an even more pristine space that the team dubbed “PALACE (PMT Array Lifting And Commissioning Enclosure).” PALACE was essentially an ultraclean exoskeleton where much of the actual array assembly took place. PALACE was a “class 10” space — no more than 10 dust particles bigger than one hundredth the width of a human hair per cubic foot.

But the radiation concerns didn’t stop at dust. Before assembly of the arrays began, the team prescreened every part of every PMT tube to assess radiation levels.

“We had Hamamatsu send us all of the materials that they were going to use for the PMT construction, and we put them in an underground germanium detector,” said Samuel Chan, a graduate student and PMT system team leader. “This detector is very good at detecting the radiation that the construction materials are emitting. If the intrinsic radiation levels were low enough in these materials, then we told Hamamatsu to go ahead and use them in the manufacture of these PMTs.”

The team is hopeful that all the work contributed over the past six months will pay dividends when LZ starts its WIMP search.

“Getting everything right now will have a huge impact less than two years from now when we switch on the completed detector and we’re taking data,” Gaitskell said. “We’ll be able to see directly from that data how good of a job we and other people have done.”

Given the major increase in dark matter search sensitivity that the LUX-ZEPLIN detector can deliver compared to previous experiments, the team hopes that this detector will finally identify and characterize the vast sea of stuff that surrounds us all. So far, the dark stuff has remained maddeningly elusive.

Editors: Brown University has a fiber link television studio available for domestic and international live and taped interviews, and maintains an ISDN line for radio interviews. For more information, call (401) 863-2476.