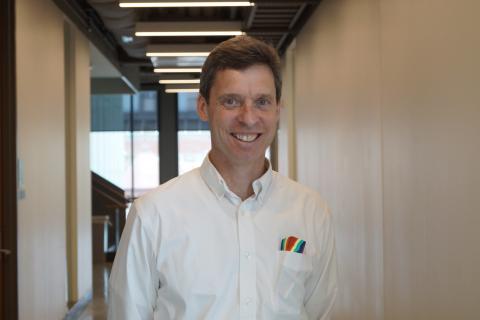 New research shows how Cooper pairs — quasiparticles that make superconductivity possible — can also play an opposite role in an exotic type of insulating materials known as Cooper pair insulators.

PROVIDENCE, R.I. [Brown University] — Superconductors are able to conduct electricity with zero resistance thanks to Cooper pairs, electron duos that team up and skate through a material unimpeded. In 2007, Brown University researchers made the surprising discovery that Cooper pairs can also exist in insulating materials, helping to block the flow of current rather than enabling it. Now that same lab group has revealed the forces involved in these “Cooper pair insulators.”

In a paper published in Physical Review Letters, the researchers show that in the insulating phase, Cooper pairs are held in check by the repulsive interactions between the pairs themselves, not by any disorder in the atomic lattice of the material. That insight could be important in designing materials or devices that take advantage of the superconducting-insulating transition  — a superconducting switch, for example.

“Essential to electronics is manipulating how electrons flow, so finding new ways in which electrons flow leads to new manipulation methods for implementation in novel devices,” said Jim Valles, a professor of physics at Brown and senior author on the paper. “This work gives us new information about Cooper pair propagation, which could be helpful in manipulating them in new devices.”

In their 2007 paper, Valles and his colleagues performed experiments on thin films made from amorphous bismuth. Thick blocks of amorphous bismuth act as superconductors, but when pared down into slices just a few atoms thick, the material becomes an insulator.

The initial research by Valles and his colleagues showed that Cooper pairs (which are named for Brown physicist Leon Cooper, who won a Nobel prize for describing their dynamics) were present in these films. But instead of moving freely as they do in the superconducting state, the Cooper pairs in the films became marooned on tiny islands within the material, unable to hop to the next island. It wasn’t clear, however, what forces were holding the pairs in place. That’s what Valles and his colleagues hoped to find with this new study.

One possibility for what holds the Cooper pairs in place is their charge. Each pair has a strong negative charge, and particles with the same charge repel each other. It could be that a Cooper pair has a hard time hopping to the next island because that island is already occupied by another Cooper pair that’s pushing back. This creates a charge-related traffic jam that prevents a current from moving across the material.

Valles and his colleagues aimed to test that scenario. For the study, they sprinkled gadolinium atoms into the atomic structure of their bismuth insulators. Gadolinium is magnetic, and magnetism weakens Cooper pair coupling — potentially causing them to break apart into individual electrons. If a few Cooper pairs broke apart even for an instant, it could free up some island space and give intact pairs room to hop. So if more pairs start hopping as more gadolinium is added, it would be clear signal that resistance in these material is driven by this charge-related traffic jam. And that’s exactly what the experiments showed.

“It’s this combination of those little islands in the films and the barriers between those islands created by the repulsive interaction of the Cooper pairs that gives rise to this resistance,” Valles said.

This is the first time anyone has been able to rule out other factors that may contribute to resistance. One other possibility was a phenomenon known as Anderson localization, which has to do with disorder in the structure of a material. Anderson effects may be important at temperatures near absolute zero, where they contribute to an even more exotic state known as superinsulation, in which resistance becomes infinite. But at relatively higher temperatures, this study shows that it’s the charge that’s important. And that could have implications for the design of new electronic devices — perhaps superconducting switches for logic gates.