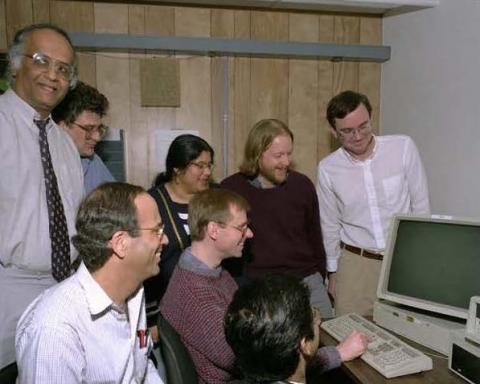 The European Physical Society has announced that the 2019 High Energy and Particle Physics Prize has been awarded to the CDF and D0 collaborations for "the discovery of the top quark and the detailed measurement of its properties".

At the time of the top quark discovery in 1995, Richard Partridge and Meenakshi Narain co-led subgroups of the top physics group, and Ulrich Heintz initiated the first measurement of the top quark mass using dilepton events.

David Cutts and Robert Lanou were founding members of the D0 Collaboration.  Lanou contributed to aspects of the D0 design, especially its innovative calorimetry.  Cutts led the D0 group from Brown University and was responsible for the design and implementation of the data acquisition system that collected the data that eventually led to the discovery and measurements of the top quark.  Partridge provided the sub-detector used at D0 to trigger data collection on interactions and to measure the interaction rate, developing the custom electronics at Brown.

As a postdoctoral fellow at Columbia University and later as a Wilson Fellow at Fermilab, Ulrich Heintz worked on commissioning the uranium-liquid argon calorimeter of the D0 experiment that formed the central part of the detector and measured the energies of particles created in the proton-antiproton collisions.

In 1993, D0 observed a striking event with an electron and a muon of very high transverse momentum and large missing transverse momentum, which appeared to be a likely top decay event. Heintz carried out a detailed kinematic analysis of this early candidate event to determine the most likely mass of the top quark. Based on this work, Heintz performed the first measurement of the mass of the newly discovered top quark based on dilepton decays. This measurement was particularly challenging because dilepton decays contain two unobserved neutrinos and cannot be completely reconstructed.

Heintz later also contributed to precision measurements of the cross section for top-antitop quark pair production by the strong interaction. From 2006-2008, Heintz co-led the top physics group and oversaw the discovery of the production of single top quarks by the electroweak interaction.

Meenakshi Narain joined Fermilab as a postdoctoral fellow and focused on the search and discovery of the top quark. She helped develop the electron identification algorithm for the D0 calorimeter, an early implementation of a multivariate analysis of the energy deposits from an electromagnetic shower in the cells of the calorimeter. At the time of the discovery, Narain led the subgroup searching for dilepton signatures that arise from the production of top-antitop quark pairs in proton-anti-proton collisions. These events provided the most striking signature of top quark production. Narain also helped understand the backgrounds for top-antitop quark pair decays to a single lepton and jets. These were critical components of the analyses that established the observation of the top quark in 1995 and produced the first measurement of the top-antitop quark pair production cross section. Her group played a leading role in the discovery of single top quark production in 2009 using a multivariate technique based on Boosted Decision Trees.

Many Brown students, both undergraduate and graduate, contributed to the D0 experiment and completed theses based on their work.  Several such theses were associated with the top quark, contributed by Monica Pangilinan, Vivek Parihar, Haowei Xu, Hwidong Yoo (PhD thesis), and by Chris Barter and Elaine Fu (ScB theses).

The full citation can be found at the EPS web page:

Original press release about the top discovery by Fermilab: https://www.fnal.gov/pub/inquiring/physics/discoveries/top_quark.html.

Article about Brown’s role in the discovery of single top quark production: https://news.brown.edu/articles/2009/03/particle-physics 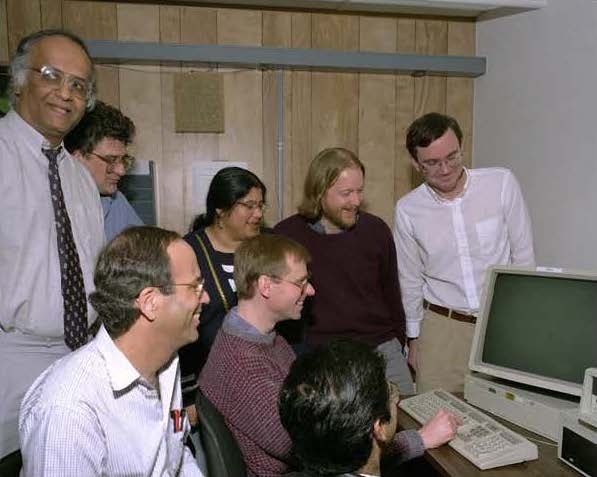 The D0 team, including Meenakshi Narain (4th from left) and Richard Partridge (6th from left),