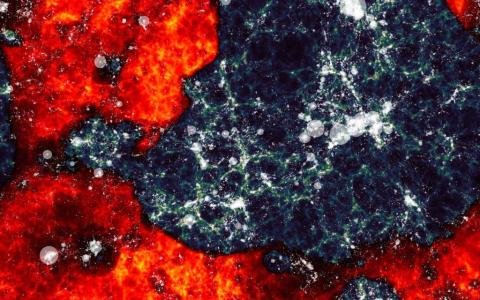 Researchers hunt for a 12-billion-year-old signal that marks the end of the post Big Bang “dark age”.

Astronomers are closing in on a signal that has been travelling across the Universe for 12 billion years, bringing them nearer to understanding the life and death of the very earliest stars.

In a paper on the preprint site arXiv and soon to be published in the Astrophysical Journal, a team led by Dr Nichole Barry from Australia’s University of Melbourne and the ARC Centre of Excellence for All Sky Astrophysics in 3 Dimensions (ASTRO 3D) reports a 10-fold improvement on data gathered by the Murchison Widefield Array (MWA) – a collection of 4096 dipole antennas set in the remote hinterland of Western Australia.

The results published in this paper were the culmination of over five years of work.  The data used in the study were collected in 2013 and were first analyzed in a paper published in 2016.  The years since saw a concerted effort to develop new techniques for improving the precision of the analysis and better identifying (and excluding) data contaminated by human-generated radio signals.

Brown University researcher Jonathan Pober was a part of this process from the beginning and played a substantial role in vetting the new techniques. Of particular importance was to ensure they would return an accurate and unbiased measurement of any signal present in the data, since techniques to remove contamination from the data can also remove the signal of interest unless the utmost care is taken. Prof. Pober designed a suite of high-precision simulations to validate the entire analysis, while Brown Physics PhD student Wenyang Li conducted a parallel analysis, applying the same techniques to an independent data set to ensure their broader applicability.

This paper is therefore important for two key reasons: it presents the most constraining limit on the EoR signal strength in the literature, but it also represents the highest level of internal validation and scrutiny applied to an analysis in this field and will serve as an exemplar for future such work.

In this simulation of the Epoch of Reionisation, neutral hydrogen, in red, is gradually ionised by the first stars, shown in white. The video was made by the University of Melbourne’s Dark-ages Reionisation And Galaxy Observables from Numerical Simulations (DRAGONS) programme. Credit: Paul Geil and Simon Mutch

More about the MWA

The Murchison Widefield Array (MWA) is a low-frequency radio telescope, located at the CSIRO Murchison Radio-astronomy Observatory (MRO) in Western Australia. The telescope is operated by Curtin University on behalf of an international collaboration of 21 research organisations spanning  Australia, New Zealand, Japan, China, Canada and the United States. More details are available at www.mwatelescope.org.