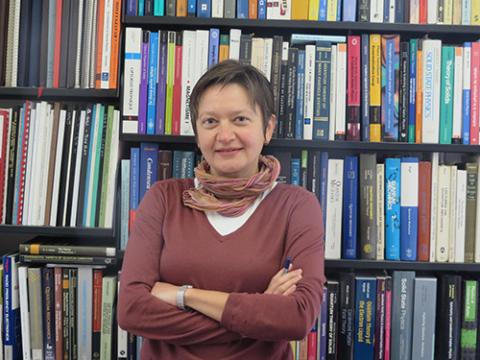 A $4 million grant from the National Science Foundation will support research aimed at developing a fundamental understanding of quantum systems to enable new quantum technologies.

Quantum technologies have the potential to spur revolutions in computing, sensing, cryptography and beyond. With a $4 million grant from the National Science Foundation, a team of researchers from Brown University and Dartmouth College will work to better understand the materials and the exotic quantum states that make these technologies possible.

“We’re trying to understand these quantum materials and complex quantum states on a fundamental level that enables us to control and manipulate them in useful ways,” said Vesna Mitrović, a professor of physics at Brown and principal investigator on the grant. “This new understanding will help us to identify which of these materials or states is useful for which applications, which in turn will help us to move quantum technology forward.”

Quantum technologies make use of the often peculiar rules that govern the behavior of individual particles. In the quantum world, particles can behave as if they are in more than one state at a given time, and influence each other’s behavior even if they are far away in space. By taking advantage of those properties, quantum computers can process information in new ways, potentially performing calculations far beyond the reach of even the fastest of today’s supercomputers. Quantum sensors far more powerful than those used today could be useful in applications ranging from medicine to seismology. And quantum cryptography could lead to intrinsically secure communication.

For all the promise, however, there are obstacles to overcome before these quantum technologies deliver their full potential. One problem is that quantum states are extremely fragile — the slightest disturbance can destroy them. And scientists still don’t fully understand how to model the complex correlations between particles in quantum systems. Those microscopic correlations are critically important, because they ultimately determine the properties of a material at the macroscopic scale.

Under this grant, the Brown-Dartmouth team will use a novel approach in which today’s small quantum computers are combined with large-scale classical computing resources to study quantum materials and complex quantum states in microscopic detail. Experimental studies of existing materials will be combined with machine learning and artificial intelligence tools to inform the design of new materials, whose properties depend on correlated quantum states that are not so fragile.

“The ability to measure these correlations gives us the ability to better understand and control these quantum states,” Mitrović said. “That could enable the design of new technologies including error-tolerant quantum computers, for example.”

Mitrović is an expert in using a technique known as nuclear magnetic resonance to probe quantum states of materials. For the grant, she’ll work with fellow Brown theorists and professors Dima Feldman and Brad Marston. The Dartmouth team is led by experimentalist Chandrasekhar Ramanathan and theorist James Whitfield. The team also includes experts in computer science and quantum physics.

“By leveraging their complementary expertise — quantum materials at Brown and quantum information science at Dartmouth — the grant will enable the creation of a New England center of excellence at the nexus of quantum and data sciences, both areas of national priority for science and technology development,” Ramanathan said. “This collaboration will allow us to tackle some of the hard problems that stand in the way of deploying quantum technologies.”

The combination of quantum information science and data science developed by this research could have broad impacts that benefit society, the researchers believe. And Mitrović said she’s excited to work with this group of colleagues on this project.

“If you asked me to assemble the dream team of researchers to approach this problem, this would be the exact group I’d put together,” she said. “It’s exciting because I think we can make genuine progress on this.”