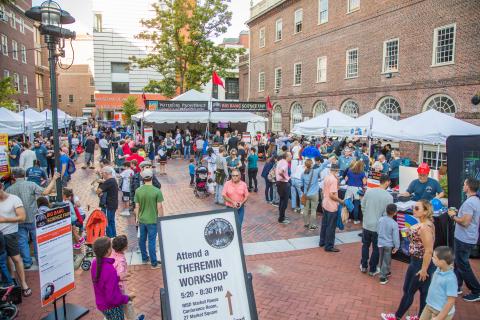 On Saturday, September 28, the second annual Big Bang Science Fair unfolded on Market Square and in other locations into a smashing success during a full WaterFire lighting dedicated to celebrate educational excellence in Rhode Island.

Coordinated by Physics Professors Meenakshi Narain, and Ulrich Heintz, the event grew relative to its first incarnation in 2018. The event aims to portrait scientific ideas in a way that makes them accessible to everyone. It breaks down stereotypical images that depict science as a subject available only to those with an academic degree and presents scientific exploration in a way everyone can relate to, regardless of age, gender, or socioeconomic background. To this end, the organizers reached out to the community to access a larger demographics. Citizens Bank (Geoffery Gunter), Skills for RI’s Future (Nina Pande), Microsoft TealsK12 (Andrea Russo), and RI Virtual Reality (Siu-Li Khoe), organized activities geared towards connecting high school students from across Providence with STEAM education.

A program of lectures cycled about 1000 people through the RISD auditorium between 4 and 10pm. David Muller from the Youtube channel Veritasium performed a number of physics demos on stage to the theme “How do we find out what is true?”. Dr. Rebecca Thompson, head of the Education and Outreach Office at Fermilab, talked about how consistent various aspects of the Game of Thrones TV Series are with the laws of physics. And Brown Professor John Donaghue talked about how to use robotics to help people with paralysis carry out simple tasks of everyday life. Dr. Lisa Michaud discussed the challenges of  Artifical Intelligence in human language processing. The event started with demonstration of the musics instrument “Theremin” by Dorit Chrysler and closed with a Jazz Performance by the group God Particle.

In-depth workshops in the big tent on Market Square and in the RISD Conference Room in Market House gave the 300 participants the opportunity to try out a variety of computer programming challenges, build cloud chambers to see the traces of elementary particles, and to learn about the Theremin, a musical instrument that is played without being touched.

Market Square and one end of College Street bustled with 15 tents filled with activities for all age ranges that explored a host of scientific fields, from physics and chemistry, to neuroscience, computer science, medicine, and the science behind cooking. To promote the role of women in STEAM fieds, each tent was named after an accomplished female scientist. The ground was again covered with interesting math mazes that challenged visitors’ puzzle skills. Canal walk hosted astronomers from Brown Ladd Observatory with their telescopes who enabled visitors to first observe the sun and later on the night sky. Several thousand people participated in the fun over the course of the event.

Brown Physicians Inc. and Brown’s Alpert Medical School were a new participant who intruduced medicine to the Big Bang Science Fair. Participants learned how to give CPR to dummies, participate in robotic surgery, inspected specimens under the microscope. A particular highlight was the living heart virtual reality demonstration by Dassault Systemes.

Also a part of the Big Bang Science Fair was a Math Open House at ICERM with exhibitions of mathematical visualizations by in-residence math-artists.

Hack401 organized a hackathon at Skills for RI during which students learned how to produce a podcast and used their skills immediately to interview scientists at the Big Bang Science Fair. Over 30 students attended. Most were from public high schools and they were almost all students of color.

None of this would have been possible without the participation of over 250 volunteers (from Brown University, Lincoln School, Moses Brown, Wheeler School, local communities), nor the generosity of a large number of sponsors [see https://waterfire.org/2019-big-bang-science-fair-at-waterfire-providence.... The lead sponsors of the event were Brown University, Citizens Bank, NSF via the USCMS Experiment, and Brown Physicians Inc.

It is hard to capture the excitement, information exchange and learning which happened at the event and the magnitude of effort which led to it. The activity leaders and core volunteers are students, professionals, scientists, artists and educators, who worked very diligently to bring this event to life.