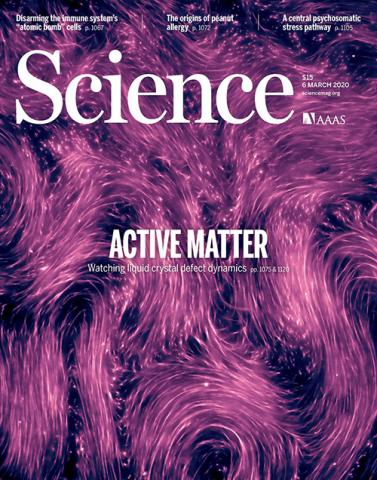 A study provides new details about the collective motion of individual agents in a liquid-crystal-like system, which could help in better understanding bacterial colonies, structures and systems in the human body, and other forms of active matter.

Flocks of starlings that produce dazzling patterns across the sky are natural examples of active matter — groups of individual agents coming together to create collective dynamics. In a study featured on the cover of the March 6 issue of the journal Science, a team of researchers that includes Brown University physicists reveals new insights into what happens inside active matter systems.

The research describes experiments using a three-dimensional active nematic. Nematic describes a state of matter that emerges in the kind of liquid crystals widely used in smartphone and television displays. The cigar-shaped molecules in liquid crystals are able to move as in a liquid, but tend to stay ordered more or less in the same direction, a little like a crystal.

In a normal liquid crystal, the molecules are passive, meaning they don’t have the ability to self-propel. But the system involved in this new study replaces those passive molecules with tiny bundles of microtubules, each with the ability to consume fuel and propel themselves. The goal of the research was to study how those active elements affect the order of the system.

“These microtubules tend to align, but also continually destroy their own aligning order with their movement,” said study co-author Daniel Beller, an assistant professor of physics at University of California, Merced, who began work on the research while he was a postdoctoral researcher at Brown. “So there are collective motions that create defects in the alignment, and that’s what we study here.”

As the system evolves, the defects appear to come to life in some sense, creating lines, loops and other structures that meander through the system. The researchers studied the structures using topology, a branch of math concerned with how things deform without breaking.

“If your goal is to understand the dynamics of these systems, then one way to do that is to focus on these emerging topological structures as a way to characterize the dynamics,” said Robert Pelcovits, a professor of physics at Brown and a study coauthor. “If we can get guiding principles from this simple system, that might help guide us in understanding more complicated ones.”

This kind of work had been done in two-dimensional systems, but this is the first time a 3D system had been studied in this way. The research showed that the dominant topological structures in the system were loop structures that emerge spontaneously, expand and then self-annihilate.

The loops are related to the kinds of defects that emerge in better-studied 2D systems, but they differ in a key way, the researchers say. In 2D, defects arise in pairs of points that have opposing characteristics or “charges,” a bit like particles and antiparticles. Once they form, they exist until they eventually run into a defect with the opposite charge, which causes them to annihilate.

The loops that form in 3D, in contrast, have no charge. As a result, they form and annihilate all on their own. They’re still related to the 2D defects structures, however. In fact, the 3D loops can be thought of as extensions of 2D point defects. Imagine two point defects sitting on a 2D surface. Now connect those two points with an arc that rises up out of the 2D surface, and a second arc on the underside of the surface. The result is a loop that has both charges of the points, but is itself charge neutral. That enables nucleation and annihilation all on their own.

The researchers are hopeful that this new understanding of this system’s dynamics will be applicable in real-world systems like bacterial colonies, structures and systems in the human body, or other systems.

“What we found here is a quite general set of behaviors that we think will be fully present in similar systems that have this tendency to align, but that are also turning stored energy into motion,” Beller said.