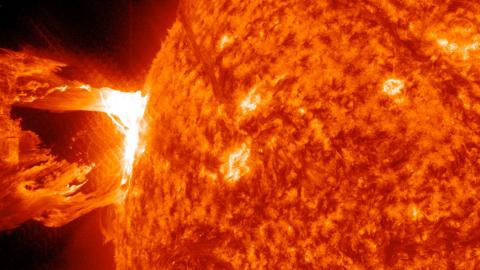 A research team has predicted the presence of “topologically protected” electromagnetic waves that propagate on the surface of plasmas, which may help in designing new plasma systems like fusion reactors.

Nearly 50 years ago, Brown University physicist Michael Kosterlitz and his colleagues used the mathematics of topology — the study of how objects can be deformed by stretching or twisting but not tearing or breaking — to explain puzzling phase changes in certain types of matter. The work won Kosterlitz a share of the 2016 Nobel Prize in Physics and has led to the discovery of topological phenomena in all kinds of systems, from thin films that conduct electricity only around their edges, to strange waves that propagate in the oceans and atmosphere at the Earth’s equator.

Now a team of researchers, including another Brown physicist, has added a new topological phenomenon to that ever-growing list. In new theoretical research, the team shows that electromagnetic waves of topological origin should be present on the surface of plasmas — hot soups of ionized gas. If the theory proves true, those waves could provide a new way for scientists to probe the properties of plasmas, which are found in everything from fluorescent lightbulbs to stars.

The research was led by Jeffrey Parker, a research scientist at Lawrence Livermore National Laboratory, in collaboration with Brad Marston, a professor of physics at Brown, and others. The paper is published in Physical Review Letters.

The waves, called gaseous plasmon polaritons, propagate along the interface of a plasma and its surroundings when the system is exposed to a strong magnetic field. Marston says that what's interesting about these waves is that they are “topologically protected,” meaning that they’re inherently present in the system and are resistant to being scattered by impurities.

“Any time you have a wave that’s protected against scattering, it means they can stay intact over a long distance,” Marston said. “As a practical matter, we’re hoping that these can be used to diagnose plasma states. One of the big problems in plasma physics is to figure out the state of a plasma without disturbing it. If you stick in a probe, you’re going to disrupt the system. We might be able to use these waves to discern the state of a plasma without disturbing it.”

One way to think about topological protection, Marston says, is something known as the hairy ball theorem. Imagine a ball covered in long hairs. If one were to try to comb those hairs down, there will always be at least one spot on the ball where the hairs won’t lie flat.

“This spot will always be there,” Marston said. “You can move it around, but the only way to get rid of it is to tear some hair out. But barring something violent like that, if you’re just manipulating it continuously without tearing anything, there’s always going to be a vortex.”

The ever-present vortex on the hairy ball is mathematically analogous to the waves on a plasma’s surface, Marston says.

“In this case, there’s always a vortex but it’s in the wave-number space, wavelengths of the different waves,” he said. “It’s a little more abstract than in real space, but the math is largely similar.”

Having fleshed out the theoretical basis for these waves, the next step is to perform experiments to confirm that they’re really there. Marston and his colleagues recently won a seed grant from Brown to help them do just that. With the help of researchers at UCLA’s Basic Plasma Physics Facility, Marston and his colleagues plan to perform experiments to detect these waves.

Ultimately, Marston hopes that the discovery of these waves could be a boon for plasma physics, helping scientists to better understand and control plasma systems. One major area Marston is interested in is plasma fusion reactors. Such reactors could one day harness nuclear fusion to produce an abundance of clean energy, but so far the plasma systems have proven hard to control.

“In the long term, we hope this can make an impact on fusion energy,” Marston said. “If we can use these waves to discern the states of plasmas, it might help in designing a fusion reactor that’s stable and able to produce energy.”

But for now, Marston and his colleagues are looking forward to performing their experiments.

“If we can demonstrate these things experimentally, people in the plasma community will hopefully start paying closer attention to this idea,” he said.

Other co-authors on the paper were Steven Tobias and Ziyan Zhu.