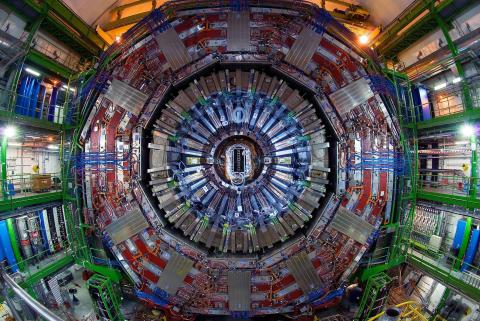 The discovery of the Higgs particle by the international CMS and ATLAS collaborations is the most famous discovery made to date at the Large Hadron Collider at CERN. The scientists made the announcement on July 4, 2012, and it was later recognized with a Nobel Prize: The theorists who predicted the Higgs mechanism received the award in 2013.

Most impressively, it only was publication number 259 for the CMS collaboration. On June 19, CMS scientists celebrated publishing their 1,000th peer-reviewed research paper.

It's an unprecedented achievement. For the last 10 years, CMS scientists have been producing, testing and publishing insights arising from the spectacular particle collisions at the Large Hadron Collider, describing fundamental aspects of the quantum universe in one paper after another. Peering into the behavior of nature's most fundamental constituents through the lens of the humming, high-tech machine known as the CMS particle detector, the CMS collaboration has contributed immensely to the very foundations of knowledge in particle physics.

Churning out raw data from a cavern located 100 meters below the French countryside, the CMS detector has produced enough data for its collaboration to publish on average more than 100 research papers per year.

The CMS detector is one of four large detectors situated around the 27-kilometer ring that is the LHC. The other three are ATLAS, LHCb and ALICE. Together, a community of more than 10,000 scientists, students, engineers and technicians of all sorts keep the detectors running and analyze the data they generate.

"A thousand very high-quality scientific papers in a decade is an amazing result, testimony of the rich physics spectrum provided by the LHC data, the versatility of our experiment and the ingenuity and dedication of our collaborators," said CERN scientist and University of Padova Professor Roberto Carlin, CMS experiment spokesperson. "We are very proud of them, and we look forward to the results we will produce in the coming decades. These will allow us to make further significant progress in the understanding of the universe."

The papers submitted by the CMS collaboration can be sorted into seven areas of physics research. Five of these areas are measurements related to physics described by the Standard Model of particles and forces, bottom quark physics, top quark physics, Higgs boson physics, and detector performance. The CMS collaboration has rediscovered with great precision the known particles and forces of the Standard Model, confirming many of its predictions and measuring its characteristic parameters with unprecedented precision.

A sixth area is heavy-ion physics. Most of the time, the LHC produces head-on proton-proton collisions, which is the subject of about 90% of the CMS papers. But the collider goes through runs in which it sends beams of lead ions, instead of protons, into the heart of the CMS detector for study. About one in 10 of CMS' published papers involves heavy-ion physics and data gathered during these runs.

The seventh area is the exploration of extensions of the Standard Model of elementary particles and their interactions. The Standard Model is humanity's current best theory to describe fundamental particles and forces, but it is not able to explain some big questions in particle physics: Why is there more matter than antimatter in the universe? What is dark matter made of? Is there more than one Higgs particle? CMS scientists aim to answer these questions, which will require extensions of the Standard Model.

"We are proud of reaching the unprecedented, historic landmark with the submission of CMS' 1,000th paper for publication," said Boaz Klima, CMS Publications Committee chair. He added that "the scientific impact of CMS publications has been at the highest level. Their quality as well as diversity of physics topics is unparalleled."

The LHC and CMS were built to study aspects of the universe never before probed. These investigations examine extra dimensions, mini black holes, string balls, dark matter candidates, the existence of long-lived particles and other phenomena that excite, inspire and could revolutionize our understanding of the subatomic world. Another very important chapter in the CMS program is the search for supersymmetric particles.

The collaboration's 1,000th paper reflects significant contributions from the United States contingent, known as US CMS, and the LHC Physics Center, which is the home base of CMS scientists in the United States, hosted at the Department of Energy's Fermilab. More than 90% of the US CMS institutions have members associated with the LHC Physics Center, which boasts a wide geographic diversity from all corners of the country. The center's events serve 800 scientists and students every year.

"It is important to realize that while CMS is an international collaboration with members from 238 institutes from 55 countries, US CMS makes up about a third of this collaboration," said Brown University scientist Meenakshi Narain, chair of the US CMS collaboration. "Therefore, the impact of U.S. physicists on the achievements of the CMS collaboration, including the papers published, are rather impressive and enhanced by their creativity and ingenuity in deploying cutting-edge analysis techniques to unravel the mysteries of the universe."

About 75% of CMS publications have direct contributions to the analysis by US CMS scientists.

"The LHC has delivered only 5% of the planned collisions. The remaining 95% to be collected in between now and the mid-2030s will represent the largest proton-proton data set ever collected in history. To fully exploit the unprecedented discovery potential of the machine, the CMS detector is being upgraded these days with state-of-the-art technologies," said scientist Anadi Canepa, head of the CMS Department at Fermilab, which is the host laboratory for the US CMS collaboration. "The breadth, scientific impact and sophistication of the LHC experiments are unparalleled. These endeavors are building the foundations of our understanding of nature for decades to come."

Research at the Large Hadron Collider is supported by the U.S. Department of Energy Office of Science and the National Science Foundation. The Department of Energy's Fermilab is the lead institution for U.S. participation in the CMS experiment at the LHC. With more than 1,000 participants from 49 institutions across the United States, US CMS is the largest national group in the 3,600-member international CMS collaboration.

Fermilab is supported by the Office of Science of the U.S. Department of Energy. The Office of Science is the single largest supporter of basic research in the physical sciences in the United States and is working to address some of the most pressing challenges of our time. For more information, visit science.energy.gov.