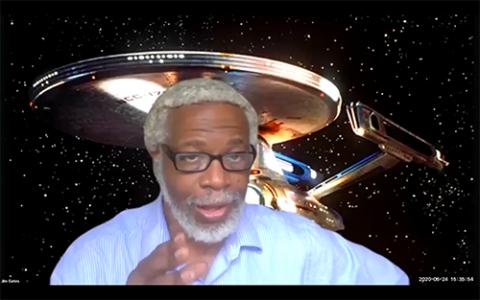 In the wake of George Floyd’s brutal killing, physicists and students from Brown took to the web to discuss strategies for increasing diversity and inclusion in the physics community across the nation.

One night in 1982, S. James Gates Jr., then a young postdoctoral researcher in physics at the California Institute of Technology, sat in a car with a friend outside his apartment. As the two discussed the finer points of a bowling match they had just completed, a bright light suddenly flashed through the rear window.

It was the spotlight on a police cruiser.

It was Gates’ second encounter with law enforcement during his time in California, and he was angry about once again being targeted by police despite doing nothing wrong. He stepped out of the car and quickly found himself staring down the barrel of a gun.

“He had drawn his gun and was ready to pull the trigger,” Gates said. “All of a sudden, a couple of thoughts occurred to me. One of them was that I could die right now. Another was that there would be no consequences at all for this policeman if that happened. And my final thought was, this is quite a statement about how much my life is worth in the country of my birth.”

Tensions eased, however, and Gates did not die that night. He would go on to become one of America’s most renowned and decorated physicists, receiving the country’s top scientific award, the National Medal of Science, in 2011.

Gates, now a professor at Brown, shared a bit of this story in late June with hundreds of physicists, students and others as part of a webinar sponsored by the American Physical Society (APS). The goals of the webinar were to harness the sharpened awareness of racial injustice, stirred by the killing of George Floyd, Breonna Taylor, and others at the hands of law enforcement, to improve diversity and equity in the physics community.

“With the death of George Floyd, we witnessed a globally broadcast extra-judicial execution in real time, and I think it outraged the moral sense of so many people not just in this country, but around the world,” Gates said. “It has prompted people to look at some things that are very difficult to talk about and do, and yet it seems to be a time pregnant with opportunity. And so that's part of the reason why we felt that it was time to discuss this while we’re in this elevated environment.”

The webinar grew out of conversations between Gates, Harvard physicist Lisa Randall and Stephon Alexander, a physics professor at Brown and president of the National Society of Black Physicists. Once the three had discussed what form the program might take, Gates, who is president-elect of APS, was able to pull the event under the APS umbrella. Gates says that around 2,700 people worldwide watched the live broadcast on June 24.

As one of five panelists who gave remarks during the event, Gates told the virtual attendees that now is the time for action to advance diversity and inclusion, both in physics and well beyond.

He went on to cite several programs and initiatives put in the motion several years ago by the APS and encouraged attendees to get involved. Among those are the APS National Mentoring Community, which matches undergraduate students from historically underrepresented groups with faculty mentors, and APS-IDEA (Inclusion, Diversity and Equity Alliance), which provides academic departments and labs with strategies for creating more inclusive and equitable communities.

Another key initiative is the APS Bridge program, which aims to increase the number of people from historically underrepresented groups who earn doctoral degrees in physics,  creating structures at institutions across the country to support underrepresented students at each stage of the road toward a Ph.D. — a similar goal to that of the Brown-based Leadership Alliance, which works across a wide range of academic disciplines.

The need to increase diversity among faculty was echoed by another webinar panelist, Farrah Simpson, a current graduate student at Brown who serves as student member on the board of the National Society of Black Physicists. Simpson said she knew from her first year as an undergraduate that she wanted to pursue a physics Ph.D. But it wasn’t until she started graduate school at Brown that she actually started to believe that her dream could be a reality.

“When I first met Professor Gates and Professor Alexander [at Brown], that was the first time I was able to see mentors who looked like me,” Simpson said. “Before that, every lecture hall that I entered was a white man. And that’s what we see in media; that’s what we see on TV — that a physicist is a white man. But having someone who looks like me doing something that I someday wanted to do had a profound impact.”

She urged those watching to hire more Black professors and postdocs and to recruit more Black students, and to take steps to make sure those people are properly supported and encouraged.

“I hope we as a community can work actively and consistently toward change,” she concluded.

“I thought what Farrah had to say was really powerful,” Alexander said. “She cut to the heart of the issue and showed what representation can mean in helping a student flourish. That’s a huge benefit of diversity. Some people see it as a zero-sum game — that if we change the way things are now, we’re sacrificing something. That’s not true. When we diversify, it enhances.”

Gates said that last month’s webinar was a first step toward capturing the energy of this moment to make a positive difference in physics and beyond. He and his colleagues have already started thinking about how they plan to follow the event up with new activities and programs.

And while the killing of George Floyd was a tragic reminder that racial inequities are persistent, Gates points out that there has been progress in the 40 years since his own terrifying encounter with police.

“Not to blow my own horn, but one metric that I can give to people is that in 2013 — 150 years after President Lincoln established the National Academy of Sciences — I was elected to that organization as its first African American theoretical physicist,” he said. “No one like me existed when I was a postdoc at Caltech facing the possibility of the end of my life. So there’s been progress. I'm actually confident that we will continue to make progress. I think that is part of the character of this country.”