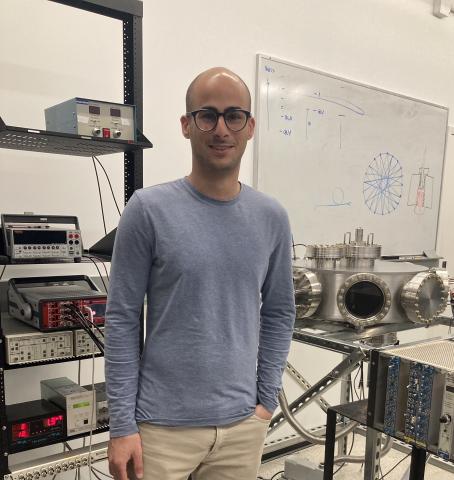 Brown Physics Ph.D. student Nicholas Drachman has been awarded a Graduate Fellowship for STEM Diversity (GFSD). GFSD is a partnership between government agencies and laboratories, industry, and higher education whose goal is to increase the number of American citizens with graduate degrees in STEM fields while emphasizing recruitment of a diverse applicant pool.

For the Fellowship, Drachman will work at the National Institute of Standards and Technology (NIST) on a device that can improve the measurement of nanoflow rates. According to Drachman, the group he will be working with at NIST, “has developed devices that can measure… the flow of liquid in a tiny channel very accurately down to very low values.” Drachman hopes this “NIST on a chip” technology, which can be used to measure fluid flow on the scale of nanoliters per minute, can be adapted to measure the flow rate in a novel nanopore ion source for mass spectrometry created in Professor Derek Stein’s laboratory.

The ion source resembles a very sharp needle that is narrow enough to restrict the flow of liquids to the point that single ions can be emitted directly from the liquid into a high vacuum, bypassing the inefficient electrospray process used by more conventional ion sources. The NIST device would potentially allow direct measurement of the flow rate in these ion sources and validate the proposed ion emission mechanism.

Future potential uses for the device include single-molecule protein sequencing. Current technology allows for the relatively cheap sequencing of single DNA molecules, and Stein and his collaborators hope to create a device that can do the same for single protein molecules. Drachman says, “what we want to do is use their [NIST’s] devices...to focus a UV light source down onto a very thin tube of liquid and potentially break up the molecules in that liquid.” This would enable the device to break off the amino acids from the protein one at a time and then emit them directly to a detector that would enable the sequencing of single protein molecules.