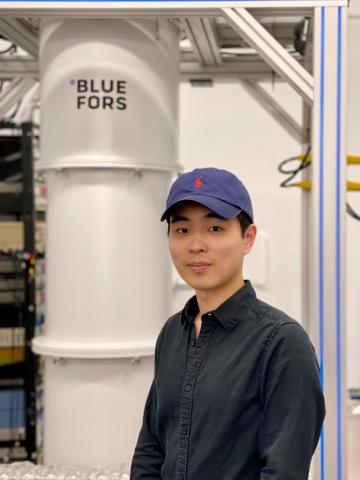 Naiyuan (James) Zhang was the first student to be awarded the Jun Qi ‘03 Ph.D. and Christine Geng Graduate Fellowship in Condensed Matter Experimental Physics. The Fellowship allowed Zhang to focus his attention on cutting edge research in condensed matter physics with his advisor, Professor Jia (Leo) Li who noted, “the support from the fellowship provided a positive boost to the research effort in my lab, translating into progress on a range of experimental projects.”

Zhang says the support allowed him to work on several projects simultaneously. These projects included one aiming to “experimentally validate fractional quantum Hall effect in graphene double-layer samples with non-Abelian wavefunctions.” According to Zhang, “the idea is to develop nano-scaled structures capable of detecting how heat flows in a 2D plane, which will provide insight into the quantum statistics associated with the electronic wavefunction.”

The Fellowship also allowed Zhang time to design a unique experiment meant to examine potential anisotropy quantum transport behavior in the so-called magic-angle twisted graphene, which Zhang describes as consisting of “two or three graphene layers stacked together with rotational misalignment in order to study how quantum phenomena behave under a low-dimensional confinement in an extreme quantum limit (ultra-low temperature and high magnetic field).”

To accomplish these goals, Zhang needed to utilize a range of state-of-the-art techniques and push the limits of our ability to fabricate nanometer-scale, atomic-layer-thin electronic devices. Zhang says, “with the support of the fellowship, not only was I able to become proficient with all these techniques, I pushed the boundary of 2D material manipulation and fabrication a bit further, and was able to fabricate a few samples of complex design and high quality. I am in the process of cooling these samples down to as low as 20mK, which is deep in the quantum regime.” The structure required the production of atomic-layer-thin components and was assembled in the nano-fabrication facility at Brown (IMNI clean room).

In the coming weeks, the team will be performing exciting experiments on these samples, which provide a glimpse into the quantum world that has never before been observed.

Zhang expressed gratitude to Jun Qi and Christine Geng, saying “I was happy to dive into this research and learn so much, and I am honored to have been rewarded with this fellowship.” Department Chair Gang Xiao likewise expressed gratitude, “the financial support from Jun Qi and Christine Geng has been valuable and timely in supporting our graduate student research in one of the most exciting areas of condensed matter physics, two-dimensional electronic solids. We are grateful to Jun and Christine for their generosity and their interest in our quantum materials research.”