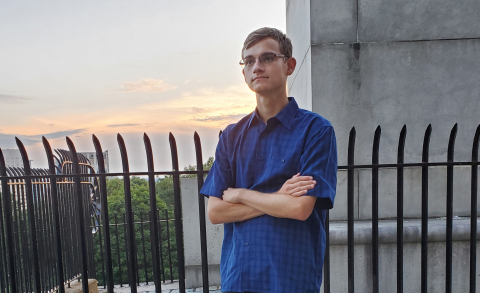 Adam Furman was awarded a NASA Student Airborne Research Program (SARP) internship for the Summer of 2021. SARP is a highly selective eight-week summer internship program that offers rising senior undergraduate students and graduate students the opportunity to acquire hands-on research experience in all aspects of a scientific campaign.

In an ordinary year student interns would use one or more of NASA’s Airborne Science Program flying science laboratories (including the DC-8, P-3B, C-23, UC-12B, and ER-2 aircraft) to study Earth system processes. But, as Furman explains, the pandemic necessitated a number of changes to this summer’s program which included interns working remotely from their homes.

One advantage of having interns work remotely is that data can be collected from different locations. Furman says, “they [NASA] sent us air quality measurement instruments to take samples wherever we [student interns] are across the country and then in December we’ll all get to go to California a week and still fly some missions.” Furman has been analyzing air quality samples collected by canisters distributed to last summer’s interns who also worked remotely. According to Furman, “we found some really interesting data that might indicate that perhaps some air quality guidelines are not being followed as strictly as they should be.” An airborne pollutant sensor monitored by Furman is currently collecting data from the roof of the Barus and Holley building. Data from this device is yet to be analyzed, Furman says it will likely be studied by next year’s internship group.

Student interns across the country are also working on other projects this summer, Furman explains, “there are 28 interns divided across four different NASA research groups that focus on different earth science-related disciplines.” Furman has been contributing to the research done by a group that is taking ocean-related measurements using his expertise in computational physics. He has spent the summer constructing a mathematical model that can analyze organic matter in the oceans.

Furman has found working on projects remotely both rewarding and challenging. “I think they've done a lot to make it more manageable. The program is only four days a week, but you still need to be on Zoom a lot which can be difficult. It's just not the same as interacting with people in real life.” On the other hand, Furman believes the remote set-up has also offered him the opportunity to focus on his computational modeling work. “They [NASA] really care a lot about our well-being and tried to make sure that the activities and lectures are interesting. I’ve gotten a lot out of [the program], and I think I had the best possible experience I could have had under the circumstances.”