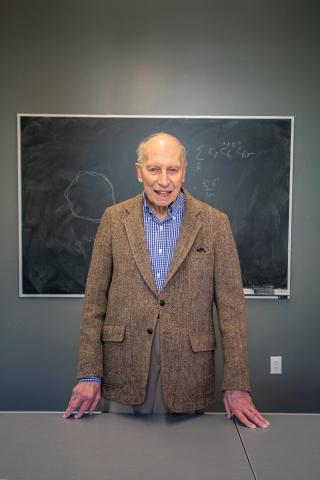 At the age of 89, Manfred Steiner is finally what he always wanted to be: a physicist.

After successfully defending his dissertation, Steiner will receive his Ph.D. from Brown University’s Department of Physics in February. For Steiner, it is the realization of a lifelong dream — albeit one that was temporarily interrupted by a 30-plus-year career in medicine.

“It’s an old dream that starts in my childhood,” Steiner said. “I always wanted to become a physicist.”

Now that he’s done it, he plans to continue working with his advisor, physics professor Brad Marston, to publish journal articles based on his dissertation, titled “Corrections to the Geometrical Interpretation of Bosonization”

To say that Steiner’s path to a Ph.D. in physics was not a traditional one would be an understatement. As a young man, Steiner fled the chaos of his birthplace of Vienna as World War II ended and eventually made his way to the United States.

“I knew physics was my true passion by the time I graduated high school,” Steiner said. “But after the war, my uncle and my mother advised me to take up medicine because it would be a better choice in these turbulent after-war years.”

Although he excelled at and loved physics, Steiner followed his family’s advice.

“My uncle was a physician, an ear, nose and throat specialist, and he had taught in the United States for a while,” Steiner said. “He taught plastic surgery — showing people how to make noses smaller or how to straighten them out. My family’s advice was that medicine was the best path for me. So I reconciled myself, ‘they are older and wiser,’ and I followed their advice.”

Steiner went on to earn a medical doctorate in 1955 from the University of Vienna and soon after his graduation he made his way to Washington, D.C. where he finished his initial training in internal medicine. He next began a traineeship in hematology at Tufts University under Dr. William Damashek, who the American Society of Hematology describes as “the preeminent American clinical hematologist of his time.” The traineeship included a three-year training in biology at the Massachusetts Institute of Technology and he earned a Ph.D. in biochemistry there in 1967.

Steiner moved to Rhode Island when he was offered a position as a hematologist in the newly established Program in Medicine at Brown University (now the Warren Alpert Medical School).  In 1968 he was appointed as an assistant professor of medicine, working primarily in research. He was promoted to full professor in 1978. In 1985 Steiner was appointed head of the hematology section of the medical school, a position he held until 1994.

When approaching retirement, an associate of Steiner’s became chief of hematology at the University of North Carolina, Greenville, and asked Steiner to join him to establish a research program in hematology. Steiner went on to direct that program until 2000, when he retired from medicine and returned to Rhode Island.

All the while, Steiner’s passion for physics never left him.

“Even when I was in medical school I went at times to lectures by a renowned physicist Walter Thirring,” Steiner said. “His lectures always fascinated me. I was captivated by quantum physics and wished I could go into more detail in this.”

That deep dive into quantum mechanics would have to wait, however. “You cannot do medicine halfway,” Steiner said. “You really have to dedicate your life to it.”

But throughout his long career in medicine, Steiner says he never stopped thinking about physics.

“Physics was always a part of me,” he said, “and when I retired from medicine and I was approaching age 70, I decided to enter the world of physics.”

Steiner started taking physics classes at MIT, but soon found the demands of commuting to Boston overwhelming so he decided to transfer to the program in physics at Brown, where he had spent a good part of his academic life.

He found the Brown Physics Department a welcoming environment for a late-in-life learner. Teachers were “delighted to have me in class,” Steiner said, and his fellow students liked him and treated him well.

Steiner did not consciously set out to earn a third doctoral degree when he began his studies at Brown. “Originally I just wanted to take classes, doing something that helped my mind and was interesting to me,” Steiner said. But by the Spring of 2007, Steiner had completed enough classes to be admitted to the graduate school as a Ph.D. degree candidate.

After admission to the Ph.D. program, Steiner continued his coursework at the graduate level and set out to look for a dissertation adviser. Initially, Steiner considered nuclear physics, but thought it might take him away from his family, so he approached Brad Marston who is a condensed matter theorist who also works on climate science. Marston says he did not work on nuclear theory, “so I gave Manfred a project that was the closest to high energy physics that I did, which was bosonization.”

Marston recalls initially being skeptical when approached by a septuagenarian student about serving as a dissertation advisor. “To be honest, I was skeptical because people do not usually do physics, especially theoretical physics, at an advanced age,” Marston said. “But in a moment of weakness, I agreed and said ‘yes.’ I knew his story, and I was very sympathetic to his desire to fulfill his lifelong dream of becoming a physicist.”

“Electrons are fermions and photons are bosons,” Marston said. “But there are certain circumstances under which you can characterize a fermion as a boson. That is what is known as bosonization, and there are certain advantages to doing that. Usually people do this for one-dimensional problems, but for years I had been working with people like the late Tony Houghton trying to extend this to higher dimensions, such as two dimensional or three-dimensional metals.  We had some success with this, but also discovered some limitations, so I gave Manfred the job of trying to move beyond those limitations. That was a challenging project. I did not give Manfred an easy project.”

“I remember meeting Manfred in the hallway when he was taking undergraduate classes,” Valles recalled. “He was unabashed about wanting to do physics and having wanted to do it all his life. His excitement about physics as someone who had such a stellar career in another field felt really affirming.”

Valles describes working with Steiner as “really pleasurable,” and adds, “the theory that he was doing involves techniques that are incredibly advanced and challenging to master.” Of his dissertation, Valles says Steiner, “did an amazing job describing the march of physics in the context of bosonization. He believes in the human mind’s capacity to advance and create knowledge. Seeing him do it was incredibly inspiring, enabling, and empowering to me as a physicist.”

Having successfully defended his thesis and completed all requirements for a Ph.D. in physics, Steiner says he’s ecstatic.

“It feels really good,” he said. “I am really on top of the world.” And despite this being his third doctoral degree, it’s particularly special to him. “This Ph.D. is the one that I most cherish because it’s the one that I was striving for my whole life.”

And Steiner is not prepared to rest on his laurels. He is currently reworking part of his dissertation for publication and plans to continue his theoretical physics work.

“Even though I am old, I would like to continue with physics,” he said. “And even after writing and publishing this paper, I want to continue my research.”

That perseverance is consistent with Steiner’s approach to life, and he believes he still has more to offer. “I always tried to keep my brain sharp,” he said. “Physics certainly helped me do that.”

Steiner admits he sometimes wonders how his life might have gone differently if he had not heeded his mother and uncle’s advice as a young man. “I do sometimes wonder how things might have gone differently,” he said. “I do not really regret it now. It was a good life and I made many great friends. It felt very good, particularly after I got my Ph.D. and worked in academic medicine. But physics always lurked in the background.”

When asked what those approaching retirement age should do Steiner says everybody needs to make their own choices. But for him, the choice was clear.

“I could not imagine spending my life playing golf all the time,” Steiner said. “I wanted to do something that keeps my mind active. But it is a matter of whatever you want to do. If you have a dream, follow it. Sometimes that dream may never have been verbalized, it may be buried in the subconscious.  It is important not to waste your older days. There is a lot of brainpower in older people and I think it can be of enormous benefit to younger generations. Older people have experience and many times history repeats itself.”