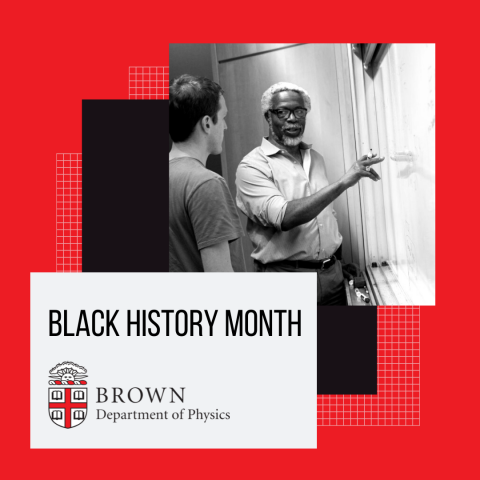 Brown Physics is committed to promoting diversity and inclusion in the physical sciences and is proud to celebrate the achievements and contributions of Black Americans today and every day. In honor of Black History Month, February 2022, please explore some of these resources that support the Black community and highlight their contributions to the sciences.

New Book Talk: Stephon Alexander, Fear of a Black Universe
Brown's Center for the Study of Race and Ethnicity sat down with Professor Stephon Alexander to discuss his recent book, "Fear of a Black Universe: An Outsider's Guide to the Future of Physics." In the work, Alexander offers three principles that shape the universe with their inconsistency--invariance, quantum change, and emergence--in support of the theory that great physics requires scientists to embrace the excluded, listen to the unheard, and be unafraid of being wrong.

Professor Jim Gates on starships, string theory, and why he came to Brown
An interview from Alumni & Friends - Brown University on YouTube: "For Ford Foundation Professor of Physics Sylvester "Jim" Gates, all it took was seeing a sci-fi film as a child to spark his love for science. A world-renowned theoretical physicist, Gates talks about his childhood fascination with space, his work on supersymmetry and string theory, and why he thinks Brown is the perfect place to uncover answers to the universe's biggest questions."

STEMJazz
STEMJazz an incubator and networking hub that explores areas of intersection and commonalities between researchers across STEM fields and their distinct disciplinary focus.

National Society of Black Physicists
"Founded in 1977 at Morgan State University, the mission of the National Society of Black Physicists is to promote the professional well-being of African American physicists and physics students within the international scientific community and within society at large." The current NSBP President is Stephon Alexander.

#BlackInPhysics
#BlackInPhysics is a week dedicated not only to celebrating Black physicists and our contributions to the scientific community, but also to reveal a more complete picture of what a physicist looks like.