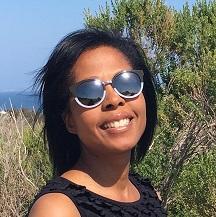 Physics Demonstrations manager Angella Johnson has begun publishing an ambitious series of educational videos on YouTube that draw on her experience in demonstrations, the knowledge of Physics faculty members, and professional expertise throughout the university.

Physics Fundamentals is a new educational video series from the Brown University Department of Physics intended to make essential physics concepts accessible and fun for 5th to 8th-grade science students. The series is the brainchild of Physics Demonstrations Manager Angella Johnson and produced in collaboration with Media Services in Brown’s Office of Information Technology with the aid of Brown Physics faculty members.

The first video in the series, “How does a slinky walk down the stairs?” has already been posted to the Department’s YouTube channel and garnered attention with over 500 views. In the video, students discover the physics behind the ubiquitous toy’s seeming ability to “walk” down a flight of stairs with the aid of Brown Professor of Physics Jim Valles and demonstrations set up by Johnson.

A second video that explains the physics behind the skateboarding trick known as “the ollie” is set to premiere on YouTube on Friday, May 6 at 4 p.m. EDT. In the video, Associate Professor of Physics Derek Stein explains the fundamental physics behind the famous trick in which both the skateboarder and the skateboard leap into the air. Brown Physics graduate students Nicholas Drachman and Jacob Burba assist Stein by demonstrating the trick at a local skatepark. Drachman held the world record for landing the most consecutive ollies (302) from October 14, 2018, until August 24, 2021, a feat memorialized in Guinness World Records. Stein is enthusiastic about the result and says, “We hope this will become known as the ‘Video Days’ of skateboarding physics videos.”

Johnson says the inspiration for Physics Fundamentals came to her while she was in her previous position at the University of Southern California. She says she was inspired to create a physics video series after doing some behind-the-scenes work on commercials and television programs and from working with USC Professor of Physics Clifford Johnson. Professor Johnson is renowned for his ability to explain complex physics concepts to the general public through blogging, videos, multimedia, and graphic novels.

While the videos “are primarily targeted at middle and high school age students,” Johnson says she believes they will be “enjoyed by anyone interested in science regardless of age.” According to Johnson, the purpose of the videos is twofold, “to serve as a resource that teachers can use in the classroom, but also to pique the interest of young minds to pursue science as a career path.”

Soon after starting at Brown, Johnson approached Physics Department Chair Gang Xiao about a video series and quickly gained his enthusiastic support. Xiao recognized the idea aligned with his priorities as chair and would serve as a valuable means of outreach into the community. She then met with former Director of Educational Media Tanya Waldburger, who put her in touch with Associate Director of Media Services Giovanna Roz Gastaldi.

Gastaldi was also excited by the idea and assigned members of her team, including Paul Marsella and Michael Spaur, to work with Johnson on developing scripts and shooting the videos. Johnson says she also found Brown Physics faculty members eager to participate in the project and that their expertise was essential in creating videos that are both informative and accurate.

Johnson says she is happy to be working at a university with both the resources and vision that allowed her to pursue such an ambitious project. She says she is “grateful for the support I’ve received from all corners of the University.”

The series will continue with new videos already in production. In addition to the upcoming “ollie” video, future videos will cover topics such as fire extinguisher propulsion, rock climbing, superconducting magnetic levitation and astronomy.