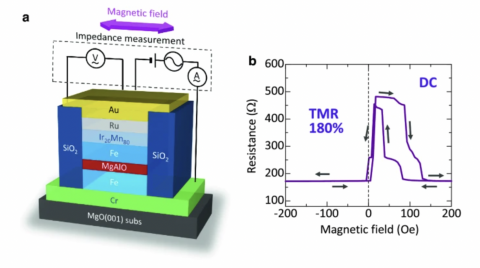 A research group, including Brown University Professor of Physics and Engineering Gang Xiao, has successfully observed the world's largest tunnel magnetocapacitance (TMC) ratio and explained its mechanism. In addition to Xiao, the international collaborative was comprised of Kenta Sato, a second-year master’s student at Keio University’s Graduate School of Science and Technology in Japan, Hideo Kaiju, Associate Professor at Keio University’s Faculty of Science and Technology, and colleagues including Hiroaki Sukegawa, Principal Researcher at the National Institute for Materials Science in Japan.

TMC is a phenomenon in which capacitance (electrical capacitance, or the amount of electricity that a system can store) changes based on a magnetic field. This phenomenon is observed in textured magnetic tunnel junctions (MTJs) with a thin insulating layer between two magnetic layers. Until now, the largest observed TMC ratio, a figure-of-merit on magnetic sensitivity, has been 332%. In this study, researchers achieved the world's largest TMC ratio of 426% by using an insulation tunneling layer and applying voltage biasing. Furthermore, they explained the mechanism behind this phenomenon using dielectric theory, which incorporates quantum mechanics and statistical theory.

These results pave the way for creating new capacitance-detecting, high-performance magnetic sensors and magnetic memory devices. They are also expected to be applied in next-generation Internet of Things (IoT) technology—a major driver of the Digital Age—and to make significant contributions to the acquisition, accumulation, and analysis of big data. In the future, these findings are expected to be put to practical use not only in the Information Technology/Information and Communication Technology (IT/ICT) field but also in a wide range of other fields, including environmental energy, healthcare, health sciences, transportation, agriculture, and manufacturing.


The research results were published online in Scientific Reports (via Springer Nature Group) on May 16, 2022.