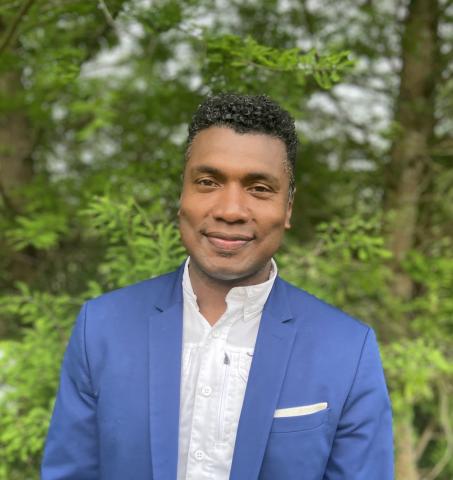 Brown University Professor of Physics Stephon Alexander was elected a Fellow of the American Physical Society (APS) for 2022. Alexander is the first Black physicist to earn this distinction in the Division of Gravitational Physics.

The APS Fellowship Program was created in 1921 so that the physics community could recognize peers who have “made advances in the field of physics through original research and publications or made significant innovative contributions in the application of physics to science and technology.” According to APS, “Each year, no more than one-half of one percent of the Society’s membership (excluding student members) is recognized by their peers for election to the status of Fellow of the American Physical Society.”

The APS award citation notes Alexander was recognized for “contributions to understanding the potential quantum mechanical origins of the cosmological constant and for exploring consequences and observational signatures of fundamental symmetry violations in the gravitational sector.”

Alexander first came to Brown in 1993 as a graduate student, earning a master’s degree in physics in 1995 and a master’s in electrical engineering a year later. He completed his Ph.D. in physics at Brown in 2000. Sixteen years later, he returned to Brown’s Department of Physics as a full professor after stops at the Stanford Linear Accelerator Center, Imperial College, London, Penn State University, Haverford College and Dartmouth College.

Alexander credited Brown for providing him with the tools and confidence needed to succeed as a physicist. “My time and education at Brown, with a rare mix of world-class professors, mentors and community, gave me the tools to dream, imagine and execute these theories over the years.” He added, “I hope this award inspires and empowers our students.”

Alexander’s contributions to physics lay at the interface between cosmology, particle physics and quantum gravity. He works on the connection between the smallest and largest entities in the universe, pushing Einstein’s theory of curved space-time to extremes beyond the big bang with sub-atomic phenomena. Alexander is a specialist in string cosmology, where the physics of superstrings are applied to address longstanding questions in cosmology.

At Brown, Alexander is also a professor in Brown’s STEMJazz organization. STEMJazz was founded in 2018 by Associate Provost for STEM Initiatives at Brown University and Professor of Engineering Christopher Rose to serve as an “incubator and networking hub that explores areas of intersection and commonalities between researchers across STEM fields and their distinct disciplinary focus.”

In addition, Alexander is the author of two best-selling books on physics, “The Jazz of Physics” and “Fear of a Black Universe.” He is also a former president of the National Society of Black Physicists. Throughout his career, Alexander has found numerous ways to mentor students from historically underrepresented groups to encourage them to pursue careers in science. This includes creating the “Dream + Inspire: Mentoring Future Leaders” program he started in coordination with the Harlem Gallery of Science in 2021.