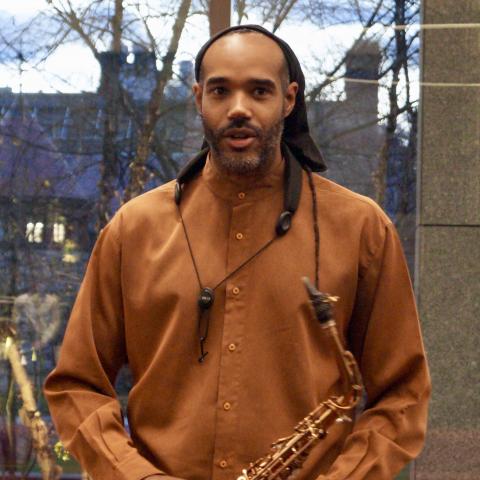 The Brown Department of Physics Diversity and Inclusion Action Plan (DDIAP) committee kicked off its inaugural artist-in-residence program with a visit from renowned jazz saxophonist and mathematician Marcus G. Miller.

Based in New York City, Miller has long maintained an interest in math, science and music. He began studying saxophone at age nine under the tutelage of world-renowned saxophonist Bruce Williams. While Miller worked as a musician through his teenage years, rather than attend a conservatory, he chose to attend Harvard University, where he earned a degree in mathematics. In addition to his career as a performer, Miller is a teaching artist at the New Jersey Performing Arts Center and was noted as an Artist of Distinction by the state of New Jersey. He has performed at the Obama White House, Madison Square Garden, The World Economic Forum at Davos, The Montreux Jazz Festival and The Late Show with Stephen Colbert.

A natural choice to inaugurate the department’s artist-in-residence program, Miller visited the department from November 30 through December 1, 2022. During his residency, Miller engaged in one-on-one meetings with students and faculty, visited classes, had lunch with graduate and undergraduate students and led an improvisation workshop.

Miller’s residency was capped by a performance and discussion session in the Engineering Research Center lobby, where he was joined by Ashish Vyas, bassist with downtempo pioneers Thievery Corporation. Miller and Vyas performed improvised compositions interspersed with observations and advice on art, music, science and life from Miller.

One may ask why a physics department needs an artist-in-residence and how doing so promotes diversity and inclusion. The program is the brainchild of Professor of Physics Stephon Alexander. Like Miller, Alexander is an accomplished saxophonist who has played professionally. Alexander said he sees the artist-in-residence program as “a way to bring people together in service of exploring new and different ways of being creative.” “Inclusion and diversity are not just concepts,” said Alexander, “they are active processes.” “People came together to make this happen, and they came together for the experience,” he said. “It shows that our department welcomes people from diverse backgrounds and with different ways of thinking about problems. Opening ourselves up to outside influences also contributes to diversity within the department.”

Assistant Professor of Physics and DDIAP member Jonathan Pober added that he sees a two-fold benefit to the artist-in-residence program. “It’s great to get people thinking in different ways. It’s easy to get stuck in research, and sometimes it can be invaluable to approach things from a new angle.” Pober added, “As Robert Hunter so eloquently said, ‘Once in a while, you get shown the light in the strangest of places if you look at it right.’” Pober noted that “it’s equally if not more valuable to have a department that is welcoming to people from all backgrounds, whether inside of physics or out. Events like this really open our department to the broader community, making it a more vibrant place for everyone.”

Professor of Physics Ian Dell’Antonio saw additional benefits to the residency. Dell’Antonio said, “Marcus’ residency not only showed the connection that exists between physics and art and the mutual interests that can live in all of us but also made people think of physics as something that touches all of society and is for everyone (inclusive in the biggest sense of the word).” He added, “Marcus’ residency provided a perfect inauguration for recurring connections between physics and the arts.”

During his talk, Miller pointed out that some of the keys to success in science and music are the same. He emphasized the commonalities between the subjective experience of actually doing mathematics and music. He noted how the “thought work” behind both disciplines are more closely related than many people assume. Both are creative processes, and he noted that to do them well, both require imagination and perseverance.

But a critical component to success in either arena, from Miller’s perspective, is what he called “anti-fragility.”

“One of the questions I ask myself when I’m practicing the horn, or studying something, or preparing for a talk,” said Miller, “is do I have a wide enough base of knowledge to be able to talk freely and in an empowered way to deal with any weird situations that might arise.”

Miller made the case that this can’t always be achieved when constrained by the walls of academia, “You don’t learn this by learning to get the right answers to the right questions because things are so narrowly defined,” he said. “You learn this by going out in the world and dealing with unpredictable situations. You learn it by talking to people you don’t like and disagree with. You learn it by having debates, by making your points, by falling on your face and taking losses, by being embarrassed, and sometimes by changing your direction.” According to Miller, “This allows you to operate from a base place of ‘no matter what happens, I’ll be okay.’”

Miller added, “The idea of having a ‘safe space’ is not something I particularly cherish. You don’t want to be involved in situations that are too chaotic or dangerous, but at the same time, you should seek out situations that are challenging and have a little bit of an edge to them.”

Physics Ph.D. student Calvin Bales, who serves on the DDIAP committee, believed the event helped build a sense of community in the department. “Marcus Miller's visit was one of my favorite events that the department has hosted in my three and a half years here! It was a lot of fun to be in a setting where conversations about physics and research were interspersed with live jazz performances, and being in spaces with undergrads, grads and faculty all engaged in something new definitely built a stronger sense of community,” said Bales.

Bales added, “I especially enjoyed having someone outside of physics, but still with an appreciation for and understanding of the field, be invited to share knowledge in a way that I’ve only seen physics academics be granted space in the past. As a graduate student who spends most of my time thinking about my research, his insights were a great reminder that exploring things outside of physics can be really beneficial to help develop ways of thinking within my work.”

Alex Green, a second-year undergraduate physics concentrator and DDIAP member, said that he found Miller’s visit inspirational. “I spent a lot of time with Marcus over the time he was here. I had a one-on-one meeting with him, I met with him and a group of black grad students, I had lunch with him, and then I saw him later in the day for his performance. It was a really great experience for me because he is obviously a very accomplished person in his field, and seeing him and talking to him about what he does on a day-to-day basis, was really inspiring,” said Green.

Green noted that he appreciated that Miller is also a mathematician “because for students of color, sometimes it’s hard to see what our lives would look like in this type of field because there aren’t a lot of people in STEM that look like us. We’re getting there, but we’re not quite there yet. I don’t know what I’ll be doing 20 years from now, but I’d like to do something in physics or math.”

Green said he found the meeting between Miller and other black students particularly helpful. “I hadn’t met a lot of those people before. We all exchanged contact information, and we plan to all get lunch together soon. I feel like having Marcus here facilitated that.” Green added, “one of the biggest issues for students of color in physics is there’s not really a space or community for us. And in general, the undergraduate physics community kind of struggles with this, and I think having an artist-in-residence program to bring people together helps.” He added, “I’d like to see more undergraduates involved next time.”

First-year Sc.M. student Jessica Washington succinctly expressed the sentiments of many students, “I’m so glad I was able to meet with and hear from Marcus Miller. It can be easy to get lost in day-to-day work, so having a moment to pause and be reminded of the bigger picture was much needed. His perspective was refreshing and inspiring, and I’m so glad he came to visit and talk candidly about his experience and share some of his craft.” 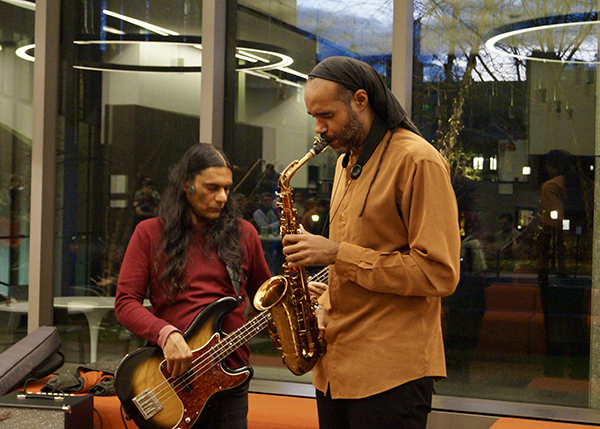 For his part, Miller said he found the physics department “very hospitable.” “It was a pleasure to be amongst people who are on the cutting edge of the field of physics and see what their day-to-day lives look like,” said Miller. “It’s an honor and a privilege not usually afforded to artists.” Miller said he was grateful for the opportunity to explore parallels between art and science in more detail, “I’ve always been fascinated by the structural similarities between what it takes to innovate as a scientist and as a musician. It was really fun to be able to explore that in real-time with people working at the cutting edge of physics.”

Miller said he found interacting with students particularly enjoyable. “I was struck by the parallel demands on the mind that students of physics and musicians face,” said Miller. “Both of us need to learn the language in order to do really creative work and put forward novel ideas,” he said. “And in both cases, the demands of daily life can get in the way of creating novel ideas and putting them out there.” “You’ve got to work through that and not make excuses,” he said.

Miller noted that he had conversations with undergraduate students who are feeling “humbled” at Brown and struggling to accept that they belong. “I told them it’s similar to being a musician in New York City. You might have been a big deal somewhere else, but when you get to New York, you’re walking among giants. Stepping into a school like Brown can feel the same way.” Miller said he stressed to the students that they would come out the other side and that the process would “clarify what’s a real problem and what’s not, and offer valuable lessons.”

The DDIAP committee plans to continue its artist-in-residence program in 2023, and discussions are underway regarding which artists to feature and what other disciplines should be represented.