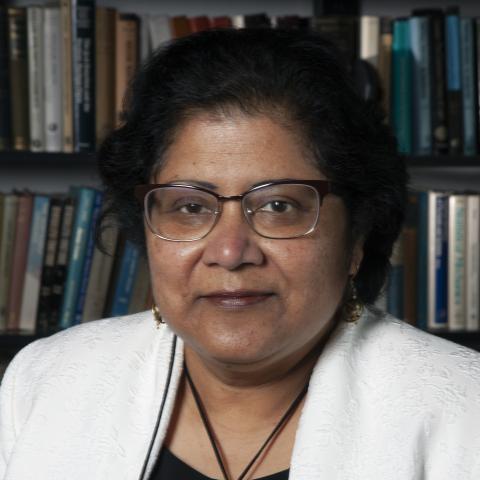 It is with deep sadness that we inform you that our colleague and friend, Meenakshi Narain, passed away on January 1, 2023. Meenakshi joined the Brown University Department of Physics faculty in 2007 and served as the first woman to chair the department beginning on July 1, 2022.

A prominent high energy experimentalist, Meenakshi was deeply involved with the Compact Muon Solenoid (CMS) experiment at the Large Hadron Collider (LHC) at CERN and the DØ experiment at Fermilab. Meenakshi conducted pioneering research on the Higgs boson and other fundamental particles and spearheaded a multidisciplinary effort to bring advanced quantum sensing and quantum computing techniques to high energy physics. She was instrumental in discovering the top quark, the heaviest fundamental particle, in 1995 and authored or co-authored over 850 articles in leading physics journals.

Meenakshi earned her Ph.D. in Physics from the State University of New York, Stony Brook. She had an Sc.B. degree from Gorakhpur University in India and an Sc.M. in Physics from Indian Institute of Technology, Kanpur, India, which recently awarded her a distinguished alumna award.

Meenakshi made numerous significant contributions to the CMS experiment in physics analysis, detector operations, and detector upgrades. She was a member of the CMS Management Board as the United States regional representative. She served as the Chair of the U.S. CMS Collaboration and was a leader of the CMS group from Brown. She was a founding chair of the CMS Diversity Office and a leader of the CMS Women’s Forum. She was also a leader in the U.S. CMS Tracker Upgrade Project. In a statement, the U.S. CMS leadership group noted, "Her impact on CMS has been immeasurable and her many contributions have been critical to the success of the collaboration.”

Meenakshi was a strong and persistent advocate for diversity and inclusion in Physics. She served as a member of the CMS Task Force on Diversity and Inclusion and engaged in STEM outreach activities to encourage the participation of young women in science. She organized the Conferences for Undergraduate Women in Physics (CUWiP) at Brown in 2022 and 2023. She was the founding chair of the Diversity Committee of the CMS experiment. She was an informal mentor and faculty advisor of the Department of Physics Women in Science and Engineering (WiSE) group and served on the University GWiSE Advisory Committee. She was also the organizer and founder of the Big Bang Science Fair at WaterFire, a public outreach event promoting the appreciation of science.

Meenakshi received numerous awards and accolades for her work. She was elected a Fellow of the American Physical Society in 2007. In 2012 she was elected a Fellow of the LHC Physics Center at Fermilab where she served as Coordinator promoting collaboration with colleagues from South America, Europe, India and Iran. In 2000 she earned an Outstanding Junior Investigator Award from the U.S. Department of Energy (DOE) and a National Science Foundation Faculty Early Career Development Award, along with many other awards throughout her career. Recently she served on the DOE’s High Energy Physics Advisory Panel (HEPAP), and she was just chosen as a member of HEPAP’s P5 subpanel, which will advise the federal government on priorities for the field.

Meenakshi will be missed by her colleagues and friends across the University and beyond. We send our deepest condolences to them, particularly to her husband, Professor Ulrich Heintz, and her sons, Aneesh and Anand Heintz.

UPDATE: Viewing and Eulogies for Professor Meenakshi Narain will be at The Historic Chapel, Swan Point Cemetery, 585 Blackstone Blvd, Providence, RI on Saturday, January 7, 2023, from 10:30 am to noon. 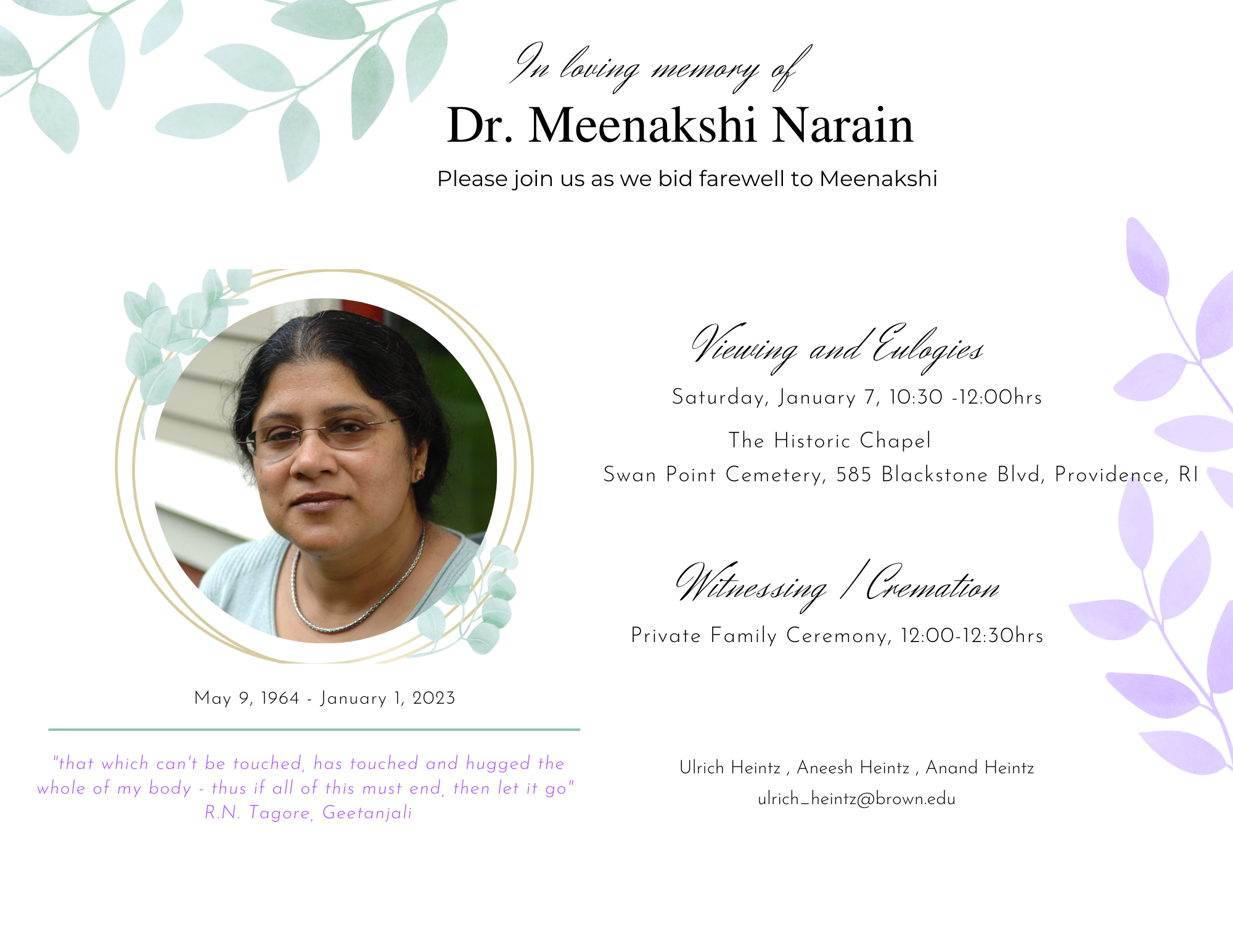