Tuesday, June 1, 2021
Sponsored by the Center for the Study of Race and Ethnicity in America (CSREA)

As Pokémon Go reshaped our neighborhood geographies and the human flows of our cities, mapping the virtual onto lived realities, so too has gaming and game theory played a role in our contemporary understanding of race and racial formation in the United States. From the Chinese Exclusion Act and Japanese American internment to the model minority myth and the globalization of Asian labor, Tara Fickle shows how games and game theory shaped fictions of race upon which the nation relies. Drawing from a wide range of literary and critical texts, analog and digital games, journalistic accounts, marketing campaigns, and archival material, Fickle illuminates the ways Asian Americans have had to fit the roles, play the game, and follow the rules to be seen as valuable in the U.S.

Exploring key moments in the formation of modern U.S. race relations, The Race Card charts a new course in gaming scholarship by reorienting our focus away from games as vehicles for empowerment that allow people to inhabit new identities, and toward the ways that games are used as instruments of soft power to advance top-down political agendas. Bridging the intellectual divide between the embedded mechanics of video games and more theoretical approaches to gaming rhetoric, Tara Fickle reveals how this intersection allows us to overlook the predominance of game tropes in national culture. The Race Card reveals this relationship as one of deep ideological and historical intimacy: how the games we play have seeped into every aspect of our lives in both monotonous and malevolent ways.

Purchase The Race Card: From Gaming Technologies to Model Minorities from the Brown Bookstore. 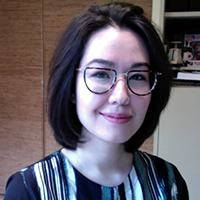 Tara Fickle is an associate professor of English at the University of Oregon, and an affiliated faculty member in the Department of Indigenous, Race, and Ethnic Studies, the Center for the Study of Women in Society, and the Center for Asian & Pacific Studies. She received her Ph.D. from the University of California, Los Angeles (UCLA), and her B.A. from Wesleyan University. Professor Fickle’s research and teaching interests include Asian/Asian American literature, game studies, the digital humanities, and comics studies. Her first book, The Race Card: From Gaming Technologies to Model Minorities (NYU Press, 2019, winner of Before Columbus Foundation’s American Book Award), explores how games have been used to establish and combat Asian and Asian American racial stereotypes. Fickle is currently working on a digital archive and analysis of the canonical Asian American anthology, Aiiieeeee!, with additional research projects on Chinese gold farming and the racialized dimensions of esports. Fickle’s critical and creative work has appeared in Modern Fiction Studies, Comparative Literature Studies, MELUS, and various public humanities portals. She also runs You on the Market, a comprehensive website for academic job-seekers.