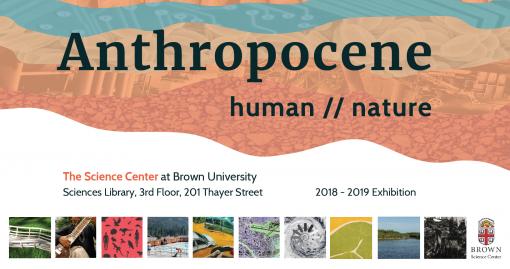 How do we experience our relationship with nature? The Science Center at Brown University presents its 2018-19 art exhibition, Anthropocene: human // nature. The Anthropocene describes the current geological time period, defined by significant human impact on the Earth.

The featured pieces offer perspectives from across the sciences, arts, and humanities on the complex relationships between humans and the natural world: from prints, drawings, and musical performances that explore cultural and personal identities in the Anthropocene, to photo transfers that express the spirituality of nature, to digital collages and photographs that trace the histories of and dissonances between the natural and built environments. This exhibit seeks to bring these forms in conversation with one another, exploring how we interpret both meaningful and destructive interactions between humans and nature. What does your coexistence with the Earth mean for you? 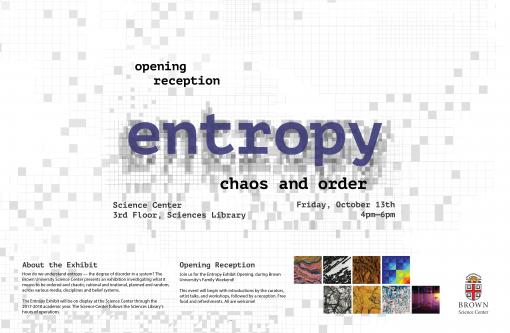 How do we understand entropy — the degree of disorder in a system? The Brown University Science Center presents an exhibition investigating what it means to be ordered and chaotic, rational and irrational, planned and random, across various media, disciplines and belief systems. The pieces featured in this exhibit represent the diverse forms ir/rationality and chaos take across the sciences, arts, and humanities: from sculptures that question the intersection of gender with memory and labor, to digital visualizations of mathematical operations, to drawings, poems, and paintings that express mental, emotional, and physical deterioration and resilience. As an interdisciplinary space, the Science Center seeks to bring these forms in conversation with one another, exploring how we interpret entropy, chaos and order in our world. What does entropy mean to you?

Persona Exhibit PosterWhat defines a person? The Brown University Science Center presents an exhibition investigating how a variety of disciplines perceive identity and the self. Fourteen students, alumni, and faculty from the Brown and RISD community generate different solutions to this question. What is your answer?

Curated by undergraduates Colvin Kenji Endo, Teri Minogue, and Adele Ruppert, “The Prototype” focuses on the design process of the products, spaces, objects, and technology we use in our everyday lives – structures that must be realized with consideration of the three principles of design: beauty, sustainability, and utility. From areas such as engineering, industrial design, architecture, urban studies, computer science, and visual art, this exhibit showcases parts of the design process that are not usually seen by the user, focusing on the inspiration, brainstorming, collaborations, revisions, and dead ends that happen before a product, structure, or space is ever realized.

Nature and its systems are at work all around us, and these systems are governed by forces that constantly evolve towards maximum efficiency, both in the grace and economy of its mechanisms and the large-scale closed loop of material and energy usage.

In the world of design, using biomimicry means incorporating elements of an organically occurring system.  Olympic swimsuits are based on sleek shark skin; the bumps on a whale’s fin are incorporated into tidal turbines to reduce drag; tall office buildings are built with big thermal masses, like termite mounds, to reduce the need for air conditioning.

This exhibit was made possible by students from all disciplines and curator Claudine Fernandez.  The exhibit will be display through the 2014-2015 academic year at the Science Center.  Stop by see the contributions as well as the compilation of all the pieces in the Exhibit Booklet.

Stay Connected with the
Science Center